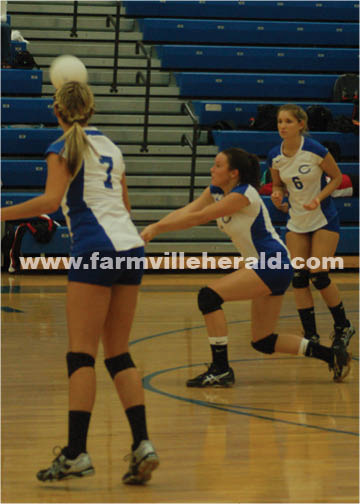 The Dukes, who defeated Prince Edward County High School for the first time in program history last Thursday, have not been able to carry that momentum over into the week. They dropped a 3-1 match at Bluestone on Monday.

“We had such a high after beating Prince Edward last Thursday,” said CHS head coach Heather Sutton. “I really felt that might be the one thing we needed to push us over. Unfortunately, we haven't been able to take that into the week.

“This one [Goochland] would've been a tough one to win. Goochland is a sound team that can make plays other district teams can't make, look routine. That said, we helped them out by playing flat.”

Goochland out-quicked the hosts. Cumberland had no answer for the Bulldogs' low set and hard spike.

“Our back line needs to see that coming and start to creep up when they do that pop set. Our front line needs to get up and block. It's tough to defend, but it's possible. That will definitely be one of the things we address in practice.”

On Monday night, the Dukes won the first set at Bluestone, before the Barons responded to take the match with three straight victories.

“We really don't play well in the first set,” said Storrie. “But we did on Monday night and won that one, and our first was our best tonight. On Monday, we started out well, but fell back on our heels after that, and Bluestone took advantage of that.”

Cumberland (2-6, 0-4 JRD) will travel to Buckingham on Monday, and will return home to face Amelia next Wednesday.

“Hopefully, that's where we can start to come together. The girls have been working hard, and with the exception of the Prince Edward game, it hasn't translated into wins.

“It's still possible to have a good finish in the district and to get into the tournament, but we've got to put together a couple of wins. For us, that's got to start on Monday at Buckingham.”

FARMVILLE – Maybe all the Fuqua School volleyball team needed was a home match. The Falcons, who had yet to... read more