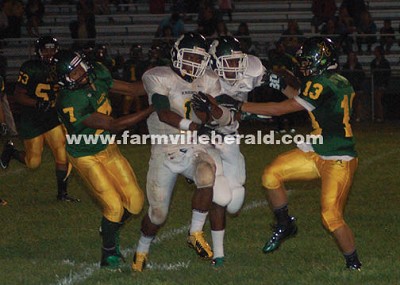 Watch for details regarding our new e-subscriptions. By subscribing, you will be able to view all the news on our website.

AMELIA – Last season, a quick start by the Buckingham County High School football team was brought to a screeching halt by James River District foe Amelia County. The Knights made sure that wasn't going to happen again last Friday in a 41-6 victory over the Raiders.

“We were looking toward this game ever since spring practice and into the summer,” said BCHS tailback Kenneth Johnson, who scored four touchdowns and ran for 149 yards on 18 carries. “We weren't going to do what we did last year.”

The Knights rushed for 340 yards as a team, and were never really challenged.

“They're fast, and that concerned us coming in,” said BCHS head coach Craig Gill. “We saw what they did against Gretna last week, and they really should've won that game, so we knew they would be dangerous.”

Though Amelia won the toss and elected to receive, Buckingham still managed to set the early tone. Cam Johnson picked up an Amelia fumble at midfield two minutes into the game, and shortly thereafter, BCHS took a 6-0 lead on an 11-yard touchdown run by Kenneth Johnson.

A second turnover by Amelia, on an interception by Leon Ragland, was returned to the ACHS 25 yard line. It didn't take long for the Knights to capitalize on a five-yard run by Kyree Koonce, who also converted the two-point try to give the Knights a 14-0 lead.

Unlike the previous week where the Knights allowed Fluvanna to get back into the game after they built a 14-0 lead, BCHS extended its lead to 21-0 midway through the second quarter on a 13-yard touchdown run up the middle by Kenneth Johnson.

BCHS continued to pull away. Koonce capped an early third quarter drive with a one-yard touchdown with 8:56 left in the third, and he then added another on a 40-yard run early in the fourth. Amelia scored with 7:39 remaining, but Kenneth Johnson closed out the scoring less than a minute later with a 49-yard touchdown run with a little over six minutes to play.

“It was very exciting,” said Kenneth Johnson. “We came out and saw a lot of people here, on our side, at least, and that helped us get up for the game. We all seemed to be up, and the offensive line blocked very well for us all night.”

In addition to Johnson's numbers, Koonce had 11 yards and two touchdowns on 11 carries. Quarterback Cam Johnson had 28 yards on two carries, and was 1-2 passing for eight yards.

Defensively, Buckingham was led by Tariq Bartee, who had ten tackles (eight solo) and three tackles for a loss.

“We had a bad taste in our mouth after they beat us so bad last year,” said Gill. “We knew we were better than we showed that night, so that was some of our motivation coming in. We were ready to play.”

The Knights remain on the road this Friday for a 7 p.m. game at Nottoway.

Tigers Unable To Close Out In Loss To Huntingdon

Notice To Our Subscribers…… Effective Wednesday, October 6, 2012, access to news on our website will be limited. Watch for... read more