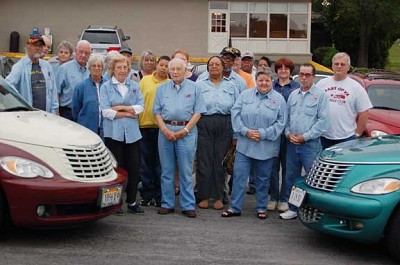 PT Cruisers Have Their Fans

PRINCE EDWARD – Call it a throwback, but time was heads turned when a PT Cruiser rolled down the street.

It has the look of old panel trucks from the black and white era of movies. Only Plymouth's rendition-first introduced at the turn of the millennium-offered the style and the fuel efficiency of a small car.

“…We were getting ready to go to, I think, Florida to visit our son in Jacksonville,” recalled Ruby Ross. “And we were at the airport and inside…they had a gorgeous sort of a teal green (PT Cruiser).”

She recounted, “And I said oh…I love that car. So that's when we got ours.”

Ruby and her husband Ernest, are members of the Heart of Virginia PT Cruiser Club that gathers monthly at Country Cookin to eat a meal, fellowship and share their affinity for the PT Cruiser. Of course, they have one (a 2002 model with about 60,000 miles on it) and, outside the restaurant on this particular meeting day, are a collection of Cruisers of different colors and options in the parking lot.

Some are every-day drivers.

Some are show cars.

“We love it dearly,” Ms. Ross says, echoing what would be a recurring theme among club members. “If I could get another…new one, I would.”

But Plymouths are gone from the four-wheel marketplace altogether and the PT Cruiser line ended in 2010. Still, something much more enduring may survive for years to come-the Farmville PT Cruiser's Club.

“Let's see, I ordered it (Cruiser)…it was April…of 2000,” recounted Rosella Hensley, who has made the trip from neighboring Amelia County for the monthly. “I had to wait six months. I got it October the 13th.

When posed with the question of the day of the week, her husband reminds her that it was indeed a Friday.

“Good Friday for me,” Rosella interjects.

She noted, “I originally saw them in (an advertisement) and I was in the process of needing a car and I thought it was cute-different. I'm always looking for something different. But I wasn't too sure because when you think about Chrysler, you think big. But when I saw it, I just fell in love with it.”

America has long had a love relationship with the automobile-from Henry Ford's Model T, to the Corvette. We have a bond with our automobiles and there is a special bond between PT Cruiser owners (the PT stands for “personal transportation”) and their vehicles.

Rosella remembers back when PT Cruiser owners were designing their automobiles-folks were adding such as ghost flames, but she opted for roses. The big rose on the hood in chrome illusion paint changes colors.

It's a name thing for Rosella, of course.

She figured nobody's was going to think about putting flowers on a car.

“No, that is my toy,” she says, when it's noted she doesn't drive it too much.

For the record, her regular vehicle is a 1997 Jeep with an odometer registering 290,000 miles.

“She's won quite a few trophies,” Rosella says of her Cruiser, “but my main thing is I have met a lot of friends …all over the world.”

Yes, there are Cruiser fans around the world.

She still talks to some of them via the Internet and still keeps up with ones that have sold their cars.

Eileen and Richard Partusch of Chase City learned of the Club through the Farmville Herald. (He works locally at Creative Electric). The two went to an early meeting and have been coming ever since.

“This is actually my second Cruiser. I love it,” Eileen said. “The only reason I got rid of my first one was because where I was working at the time taking pictures, some of the roads or driveways that I had to go down were like logging roads. Since the car is low to the ground, there were times when I would come home from work and tell Rich, 'I think you need to go make sure everything's OK under the car.'”

They traded it in, she says, adding that she “dreaded it the whole time” and they started looking for another, which turned out to be a 2003 “Limited” patriot blue model, which she uses once or twice a week to go to work.

“It's just a very, very cool car, I think,” Eileen says when asked what she likes about them. “The body style is very cool. This nostalgia, I guess would be a good word.”

Being in the club, she adds, is a lot of fun just getting together with people, planning events and going different places as a group.

While there are others (including a national club) the local club was born in a McDonalds back in several years back over coffee at break time. Ernest Ross, who worked as a town police officer before retiring, and Jack Bolan, who worked for Longwood College in the auto shop, percolated the idea on breaks.

“…I said, 'Jack, let's start us a PT Cruisers Club,'” recounted Ernest. “He said, 'Alright, let's do it.' So we sat down and we talked…we put in the paper and everything.”

Now there are about 25 members; Jack has served as the club's only president, Ross as its only vice-president.

There are no dues; funds for the club are raised with a 50/50 drawing at the meetings. New members are asked to buy their own shirts; after six months and they wish to stay with the club, they are reimbursed for the cost of the shirt.

“Yes, sir. A little,” Jack, laughs at the assertion that he knows a thing or two about automobiles.

As odd as it may sound, Jack says he really didn't have a favorite vehicle before the Cruiser, offering merely “just old cars in general.”

The Bolans have four Cruisers (he and wife Linda each drive one and his daughter drives a third with the fourth serving as a spare), divers he says that are “meant to be used and enjoyed.”

There were a few Cruisers in the area at the time the club was first formed and, Jack recounts, and they thought it “might be a good idea to see if we could get some like-minded people to come together” with them.

At first there were a few. And then a few more.

Members have come from far and wide and travel that way, too, sharing the company of one another, having some fun and pitching in with fundraisers to help others, too.

And, though there's a plethora of them on the road even these days, it's still an eye draw when they hook up and go places.

“You know, when we've five or six or more Cruisers all together going down the road, you see people really turn their heads…It's fun. It's a lot of fun,” Eileen said.

Asked about the most enjoyable part of the club, she notes: “The friendship, I think.”

But she also adds-since they're not originally from Virginia-there are a lot of things they haven't seen.

“And being in a club, we've…gone a lot of places that we probably ordinarily would not have gone,” she said. “But the number one thing is definitely the friends that we've made.”

In addition to monthly meetings, the club also plans other events-sometimes one or two per month, which club member Linwood Davis helps to list.

Or as one member points out their slogan or motto: “We cruise to eat and eat to cruise.”

They have held a barbecue at a member's home and shared in Christmas parties as well.

The Club's taken part in the Farmville Christmas Parade, the Heart of Virginia Festival, Buckingham Christmas Parade and other events. They've also raised funds for Meals On Wheels and to meet other needs in the community.

One doesn't have to have a Cruiser to be a member. Rhonda Rowland, of Farmville, who has a Corvette, is a member. Some friends talked very positively about their experience. She has been coming now over a year.

And everybody's welcome, Jack points out.<br />
“…I won't say I cried, but it's an emotional thing,” he chuckles, when asked about the end of the car's production line. “I've got attached to 'em.”

A sentiment shared by not only the Cruiser club members and their automobiles, but among the members themselves.

Treasurer To Retire In PE