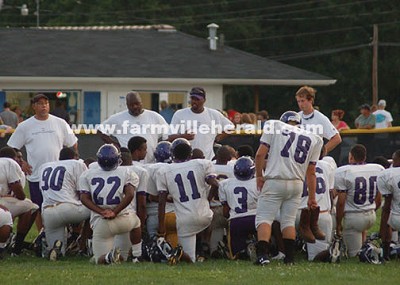 PE Gets First Taste Of The Gridiron

“It went much like we thought it would,” said PECHS head coach James Ford. “Our guys definitely know what we're going to have to work on in practice. We knew what we wanted to see, and stuck to our plan, even if the situation may have suggested otherwise. We'll work on our check-downs and switches later. Tonight was about doing the basics, and after the jitters wore off, I thought we settled in and did well. Things that we didn't do well early on, we started to do better toward the end.”

Prince Edward will host Randolph-Henry in a scrimmage this Friday at 6:30 p.m., and will travel to Fluvanna on August 24 to begin the regular season.

“Playing Randolph-Henry again will be a good test for both teams. We'll get to make adjustments and see how they work out. It will be almost like a big halftime.”

Fuqua Football Decision To Be Made Late In The Week

FARMVILLE – According to Fuqua School head coach Lewis “Skeeter” Fore, nothing has changed in regards to whether or not... read more