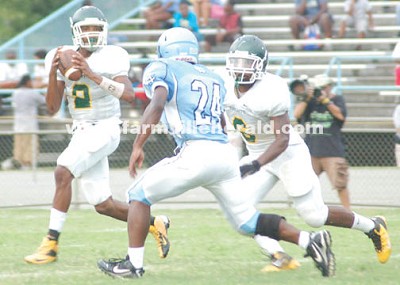 SOUTH BOSTON – The Buckingham County High School football team has accomplished a number of firsts over the last couple of seasons.

Last Friday, the Knights had another first, of sorts. Buckingham played a benefit game against a Group AAA member in a 14-13 loss to Halifax County.

The game didn't count in the record book, but head coach Craig Gill said it was beneficial for the team in many ways.

“We probably won't see Group AAA speed like this until much later in the season,” said Gill. “Teams like Goochland, and Cumberland will come close, but Halifax is quick everywhere, and it was good for us to see a team like this before we get into the regular season.”

Buckingham scored on its first drive, and held a 13-7 lead late in the contest, before Halifax scored the game-winning touchdown with about two minutes remaining on a 79-yard touchdown run by Alonzo Bennett.

The score, and eventual victory sparked an almost playoff-level celebration by the Halifax (2-8 in 2011) team and fans at Tuck Dillard Stadium.

“We gave up that big play and had a couple of penalties in key situations that cost us,” said Gill. “We saw some good things too, and we have a good idea on what we need to work on.

“Hopefully we learned tonight that we need to go ahead and finish off an opponent when the opportunity is there.”

Much like they have for the last three seasons, the Knights (9-3 in 2011) wasted no time in setting the tone at the opening bell. If not for the modified rules of the benefit game/scrimmage, Buckingham may have put the game away in the first quarter.

Buckingham's defense pushed Halifax back inside its ten-yard line to force a three-and-out on the first series of the game.

All possessions (with the exception of turnovers) started on the offensive team's own 20 yard line. Buckingham covered the 80 yards on its first offensive drive with little resistance. It took the Knights only six plays to score. A 21-yard run by tailback Kenneth Johnson gave Buckingham a 6-0 lead after a missed extra point attempt.

The Buckingham defense turned in another quick series to force a second Halifax punt, which was fielded at the HCHS 45 yard line. However, the rules of the scrimmage again pushed Buckingham back to its own 20 yard line. The Knights worked their way well into Halifax territory, before the drive stalled.

Halifax scored on its third possession. The Comets were aided by a pass interference penalty on third and long at midfield, and capitalized on the first play of the second quarter. Bennett capped the 80 yard drive with a 34-yard run, and Halifax took the lead on the extra point conversion.

Both teams substituted liberally in the second quarter, as the two squads traded possessions. Buckingham saw a promising drive stall on a holding call that negated a 50 yard run by Kyree Koonce.

Trailing 7-6 to start the third quarter, the Knights wasted little time in regaining the lead. Koonce found a crack in the Halifax defense and quickly gave BCHS the advantage on a 79-yard touchdown run on the second play of the third quarter.

Buckingham dominated time of possession, and maintained momentum for most of the second half. The teams traded turnovers, and Buckingham appeared to have gotten the best of the turnover battle, but was unable to convert a fumble by the Comets on the Halifax 35 into points, as a field goal attempt that would've given BCHS a two-possession lead, missed wide right.

“We can only learn from this game,” said Gill. “It doesn't officially count one way or the other for either team, but I think we can both feel good about tonight. We weren't intimidated by a AAA school, and we had a chance to win. They were able to get a win over a team that was in the playoffs last year. Hopefully, both teams can build on this game and have successful seasons.”

Buckingham will open its season on Friday night against its traditional season-opening opponent, Appomattox County High School at 7 p.m. in Bragg Stadium.

Practice began for the Fuqua School volleyball teams on Monday night at Gilmer Gymnasium. In all, 21 players turned out... read more