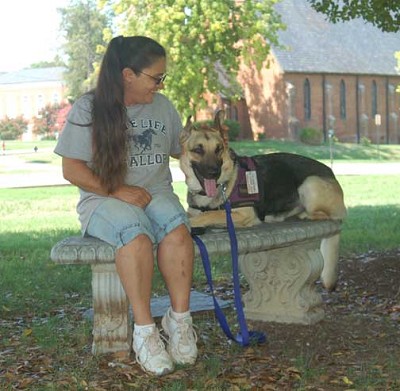 Karren Cooper, disabled veteran from Meherrin, has been searching for her service dog Tia since New Year's Eve when the German shepherd failed to return from a walk with Cooper and her other dogs. Two weeks ago, with the help of a host of Facebook friends, Tia came home. It was a 5,000-mile journey with stops along the way in California and Missouri.

“Since Tia got back I've been smiling so much my jaw hurts,” stated Cooper. “I can't stop!”

A January 20 story in the Farmville Herald reported the events of that December day when Tia disappeared.

“The other dogs ran through the woods looking for Tia – they had her scent until they got to the road,” Cooper noted in the Herald story.

Cooper found Tia's dog tags in the ditch beside the road that day.

Since then Cooper has been searching for her dog. She put flyers around town and notified local police and animal control officers.

A veteran with PTSD who is subject to seizures, Cooper depended on Tia in more ways than one.

“Tia allowed me to trust,” she reported in the Jan. 20 story. “She took my little dark world and poked a hole in it. Tia taught me to live again – that's what she did.”

When local efforts failed to turn up any signs of Tia, Cooper broadened her search. She turned to Facebook.

“Facebook, if you use it right, really does help,” Cooper said. “I have a lot of friends on Facebook, and we posted Tia's story all over the place. Last month a Facebook friend named Mary in Florida contacted me. She said – 'we think we've found Tia.'”

Mary had been in contact with Alice, another Facebook friend in Missouri who also trains service dogs. Alice had a German shepherd matching Tia's description that had been in a dog pound in California.

“The woman in California who found Tia worked with a group called 'Under Angel's Wings.' They go to different pounds to see if they can rescue dogs,” Cooper explained.

The woman with Under Angels Wings decided to help Tia.

“She called her friend Alice in Missouri and told her about the German shepherd in the dog pound who was going to be put down in three days,” Cooper continued. “She told Alice that she felt like there was something special about this dog and asked if she would take her. Alice said yes.”

Alice paid for Tia to come to Missouri and had started training her when she saw a poster on Facebook.

“Alice told me later that she wasn't going to go to Facebook that day, but something told her to,” Cooper noted. “That's when she saw the poster about Tia.”

The two Facebook friends, one in Florida and the other in Missouri, discussed the dog before contacting Cooper.

“They sent me a video,” Cooper related. “Alice had been calling her Sadie and she wasn't really listening. I told Alice her name was Tia.”

Cooper watched what happened on the video. When Alice called the German shepherd Tia the dog sat up and tilted her head. Then Tia started wagging her tail.

“It was like she was saying, 'what are you doing – that's my name!' Cooper related.”

Cooper, convinced it was her dog, began raising money to go and pick her up.

“It took about six weeks to raise the money,” Cooper said. “We paid Alice back her transport fees and vet bills, so we paid off Tia's debt.”

Cooper admitted she was “shaking like a leaf” when she finally made the trip to pick up the dog she felt sure was Tia.

“I got out of the truck and said, 'Tia – come here.' Tia ran right up to me and buried her head on my chest,” Cooper recalled. “She's been with me ever since.”

Cooper noted several identifying marks – a scar under one of Tia's eyes and three white dots under her chin.

Further confirmation came when she returned home to Meherrin.

“I was going to stay at a friends with Tia for several days to get her situated,” Cooper related. “But when we got to my house Tia started whining. All the other dogs were barking like they usually do, so I went up to the fence and they just looked at her. I opened the gate – and 50-50 chance – that was it. They knew who she was. It was really amazing.”

The following day, Cooper and Tia were in Farmville.

“The first place I went when I got back was to the Farmville police,” she said. “I had to show them because they were really good to me when I was looking for Tia. The officer told me that he knew I was going to find my dog. He said he was really proud of me for not giving up.”

Since then, Cooper and Tia have been making visits all over town.

“Everybody who helped, I went right to them,” she said. “Restaurants that put posts up, the Farmville Herald, and a lot of people I don't even know helped me look for Tia.”

Cooper also believes that Tia's story helped many in the community understand about veterans' disabilities and service dogs.

“A lot of people didn't know about or understand PTSD or traumatic brain injuries,” she noted. “One person I know didn't believe that service dogs could do the things they do. She contacted Paws and Stripes who find dogs in shelters for veterans. She called me later and told me she got a good lesson from them and didn't doubt me anymore.”

Cooper has also been getting calls from other dog owners whose pets are missing.

“I tell them not to give up hope, to have faith and fight,” Cooper said. “You have to have faith. Without prayer I would never have met the people on Facebook who helped find Tia.”

A therapist recently told Cooper that she and Tia now share another bond.

Rubbing Tia under the chin, Cooper added, “I'm proud of Tia. She's taught people a lot and not just because she's a service dog.”

Cooper has continued to stay in contact with Alice and her other Facebook friends. Alice recently reported that Tia was able to climb six-foot fences.

“Alice asked me if Tia had climbed any fences since I got back,” Cooper related. “I told her she doesn't need to climb any fences – she's home.”

FARMVILLE – Let the gains begin. The economic, cultural and social booster rockets are engaged as over 6,000 college students... read more