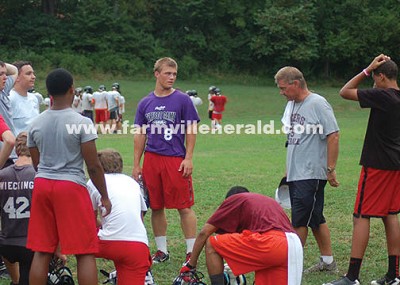 As of press time on Thursday morning, Fuqua School head football coach Lewis “Skeeter” Fore, said that a decision on whether or not Fuqua will field a varsity team this year “has not been made”.

During a visit to practice on Monday afternoon, The Farmville Herald witnessed fewer than 15 varsity-eligible participants. This week, the school has been in contact with eligible boys at the school to gauge their interest in participating.

“It might be a few days,” said Fore on Thursday morning about when a decision will be made. “Maybe in the next day or two.”

Fuqua was originally scheduled to travel to Randolph-Henry to take part in a four-team scrimmage on Friday night, but has elected to not participate.

“I told Joe [Freeland] a couple of weeks ago that we might not be able to give him a full scrimmage,” said Fore about a conversation he had with the Randolph-Henry head coach before fall practice began. “I didn't know that we would be in this bad of a situation, but we didn't want to hang him out to dry. I'm glad they were able to get a few more teams to come in, and I really appreciate how understanding he has been about this.”

With the Falcons no longer participating, Randolph-Henry's scrimmage will be held in a three-way jamboree format with Prince Edward and William Campbell.

Should the Falcons field a varsity team, they would begin their season at home against two longtime Virginia Commonwealth Conference rivals. On August 24, Fuqua would host Brunswick Academy in what has become the traditional season-opener for the two programs, and on August 31, Fuqua would host Kenston Forest as part of the school's Hall of Fame Night festivities.

Further updates will be provided via The Herald's website at www.farmvilleherald.com when a decision is made.

Into The Second Week Of Practice