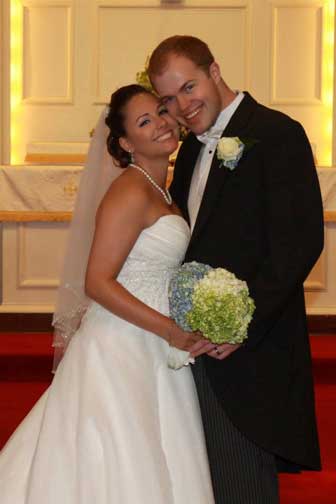 The bride was given in marriage by her father.

Mr. Crute was his son's best man. Groomsmen were Stephen Lee, Matthew Baldwin, cousin of the groom; and Christopher Warren.

Mrs. Crute, a graduate of Old Dominion University in Norfolk received an M.S.Ed in Education with a concentration in Higher Education in May, and in 2006 a B.S. in Elementary Education from Longwood University in Farmville. She is employed by George Mason University in Fairfax as the assistant director of Career Services in the School of Management.

Mr. Crute, a 2006 graduate of Longwood University in Farmville, received B.A. degrees in History and Political Science. He is employed by DDC Advocacy in National Harbor, Maryland as the Deputy Field Manager.

Following a honeymoon in Ireland, Mr. and Mrs. Crute reside in Alexandria.