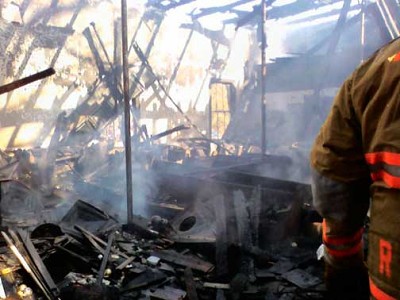 ARVONIA – When the sanctuary of Arvon Presbyterian Church was destroyed by fire on January 15, 2009, the congregation and the community suffered more than the loss of a building. Tragically, they lost a piece of history.

The portion of the church ravaged by the fire was built circa 1885 as a place of worship for the Welsh miners that migrated to the area to work in the slate quarry.

Remarkably, through what many credit to God's grace and the heroic efforts of local volunteer firefighters, the church's annex portion, which contains the kitchen, fellowship hall, and classrooms, suffered very little damage.

However, when the smoldering veil from the fire finally lifted, the sanctuary and much of its furnishings were in ruins.

Interestingly, looking back on photos of the fire, one picture seems to offer more than a view of smoldering destruction. As sunlight broke through the mangled roof, it cast shadows of crosses on the scorched walls while a golden glow of hope beamed through one of the sanctuary's windows.

In April 2009, after several months of prayer and discussion, the church voted to reconstruct the sanctuary. The goal was to rebuild and restore the beloved structure to its original design as much as possible in keeping with today's building codes and construction methods.

Elders Peggy Johnson, Bobby Jones, and Steve Sykes, along with the church's pastor, Joe Allmond, were tasked with overseeing the rebuilding and restoration effort.

Fittingly, this spring, on Palm Sunday, Arvon Presbyterian Church literally rose from the ashes and triumphantly began services in its new sanctuary. A new sanctuary that thanks to the incredibly precise memories of members like Peggy Johnson not only mirrors the one destroyed by fire but also reflects the beauty of people coming together to rebuild and refurbish a beloved place.

The worship service began with a dedication of the building. Filled with emotion, Elder Bobby Jones welcomed everyone and began thanking those who helped bring the church “back to life.”

Starting with the general contractor C. R. Newcomb, of CNC Construction, Jones began sharing a long list of people, businesses, and churches that contributed to the effort.

When Jones talked about Jason Phillips, who did most of the painting, he noted a sign that the painter crafted to mark “Bobby's Pew.”

Jones shared that as a four-year-old, he would walk the almost mile journey from Jones Town to the church with his grandmother.

“We always sat on the lead pew,” said Jones. “If I got a little rambunctious or something, she would look in her pocketbook and bring out a biscuit that was homemade that morning and that would keep me satisfied for the rest of the service.”

He thanked Brad Bickford, of Concrete Works, for the new foundation; Mr. Newton and his crew for the slate and brick work at the front entrance; and Buckingham Slate for donating the huge piece of slate for the front steps.

Jones expressed the church's appreciation to Church Mutual Insurance Company. He explained that the policy stated that if the church were destroyed by fire, it would be replaced just as it was the day before it burnt. He said the company really worked with the church to do just that. He also thanked the county's building inspector for working with the church as they went through the rebuilding process.

He thanked Wayne Cain, a local stained glass artist, for installing a special type of glass that offers the same historic look of the original glass and its natural imperfections. Cain, explained Jones, also refurbished the large brass cross, which was charred and marred by the fire. “Wayne brought it back to life,” said Jones.

Continuing, he also thanked the Arvonia Volunteer Firefighters and other companies of the Buckingham County Volunteer Fire Department as well as units from Fluvanna for all their work and their efforts in keeping the annex from burning.

“I want to thank my son for pulling a lot of the stuff out that he helped save while the fire was still blazing,” added Jones. And, he offered a thank-you to his wife, the church's treasurer, for paying the bills on time.

“I want to thank Mrs. Johnson, who is our clerk of the works,” stated Jones, drawing applause from the congregation. “Believe me, Peggy has a memory like an elephant.”

From chandeliers to candelabras and windows, Jones said that Johnson helped them duplicate the historic sanctuary by providing specific and precise details about its interior and furnishings. “Her memory is just out of this world,” he added.

Next on his list was the Arvonia Methodist Church. He explained that even before the fire, Arvon was looking for a minister. Noting that some of them heard Allmond “pinch-hit” at that church and agreed that maybe they should get him to pinch-hit for their church.

Subsequently, Allmond, with the permission of the Presbytery, became the church's interim pastor. He returned to school to fulfill some needed requirements and is now ordained and serves not only Arvon Presbyterian Church but also its sister churches Fork Union and Trinity-New Canton, which together make up the Christ Presbyterian Parish.

. “And he is doing it great and we appreciate the time he has spent and all of his efforts,” stated Jones.

Sharing that he realized he had talked long enough, Jones said he knew he hadn't thanked everybody and it was definitely not his intent to leave out anyone.

At that point, Jones' daughter offered a helping hand to her dad by thanking Fork Union Presbyterian Church for allowing the Arvon congregation to use their facilities. She added a thank-you to Trinity for all of its assistance over the last three years.

Allmond interjected, “One of the blessings that I've received in being in this pulpit is seeing that three churches can function as one congregation.”

After all the thank-yous, the pastor guided the congregation through a responsive reading for the dedication of the sanctuary as well as those seated in it.

As he continued with the service, Allmond described the palm as being symbolic of triumph and victory in Jewish tradition. He talked about the great expectations and hopes of the crowds as they waved the palms and cheered when Jesus rode into Jerusalem on the donkey, a symbol of peace.

“We have overcome the loss of our sanctuary and rebuilt it up again literally as good as new,” stated Allmond. “We even have palm branches here. We welcome our Lord into our new church.”

Arvon Presbyterian Church lost much in the fire but amazingly, much was saved. All but two of the original pews were salvaged and restored.

The pulpit, communion table, and four beautifully carved pulpit chairs, which Johnson shared were from Austria, were rescued from the fire and restored by Jim Kirtland, of Kirtland Woodworking.

According to Johnson, Kirtland was able to restore the chairs after replicating some of the carvings.

As intense and destructive as the heat was during the fire, the church's large white Christ Candle, which is used during Advent and Lent, survived. And, although it needed some restoration, the church's Pulpit Bible will continue to be read.

Granted, some of the furnishings were unable to be rescued-like the steeple bell that fell and broke during the fire. Although no longer useable, the old bell will be kept as part of the church's history. Its replacement is a donated locomotive bell.

“Many folks have steeped forward to help us in our time of need,” shared Allmond, noting that they received hymnals for the choir from a church in Iowa, choir robes and music from churches in Palmyra, and Presbyterian Hymnals from a church in Lynchburg.

“We had offers of organs and keyboards from local residents and other have stepped forward to contribute to the refinishing of the pulpit, the pulpit chairs, the pews and many other antique items that were damaged in the fire,” he continued.

“In the midst of this traumatic event, we have seen God's hand in so many areas of this,” offered Allmond.

“We have been wonderfully blessed by the outpouring of support from our friends and neighbors,” he stated “We are so thankful for everyone's help.”

From the ashes of a devastating fire, a new sanctuary has risen offering a place of worship that not only embraces the church's rich heritage but also offers hope for its future.

Arvon Presbyterian Church is located at 239 Morgan's Hill Road in Arvonia. Worship services are held at 11 a.m. on the first and third Sundays of each month.

CUMBERLAND – The request for proposals from Cumberland County for the complete general reassessment of real property during the 2013... read more