One arrested, two at large in AT&T store break-in 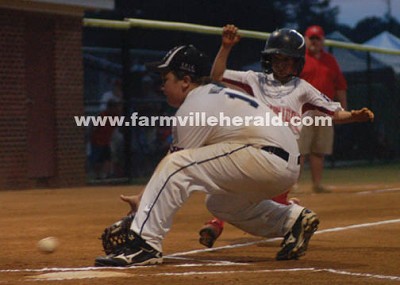 SUTHERLAND – Playing about as perfect as nine- and ten-year-olds can play, the Prince Edward Farmville Youth Association Minor League All-Stars have shredded through the District V Dixie Youth Baseball Tournament and stand just one game away from defending its 2011 district title.

PE Farmville has played the minimum number of innings (16) through four games. On Friday, PEFYA defeated Crewe-Burkeville 11-1. The PE Farmville All-Stars matched that score in a victory over Blackstone that spanned Saturday night and early Sunday afternoon due to storms that hit the area that forced the postponement of play. Later that night, PEFYA eliminated Dinwiddie National 13-3, and on Monday night it eliminated Charlotte County by a familiar 11-1 score.

It took the PE Farmville All-Stars two innings to get cranked up in their opening round game against Crewe-Burkeville, but PE Farmville opened the floodgates with nine runs in the third inning.

Batting out of the ninth spot in the line-up, Cal Smith got things going with a single. The inning wouldn't end until he made the final out. Prince Edward Farmville batted all the way through its 12-man line-up. Sith, Harry Rust, Evan Miliangos, Jared Johns, Jason Cooke, Isiah Dailey, Devon Vaughn (double), Parker Moore and Jordan Smith (double) reached base and managed to score to take a commanding lead. A double by Matt Kinne brought home PE Farmville's final runs of the inning.

In the bottom of the fourth, Cooke and Dailey singled and scored. Dailey scored the winning run on a hit by DJ Williams.

Prince Edward Farmville's Colton Copley, who was the only player not to reach base in the tournament opener, redeemed himself nicely in PEFYA's Saturday night/Sunday afternoon victory over Blackstone. Copley (2-2, two runs) reached base three times – he scored his first run after being hit by a pitch in the first inning.

Copley and Dailey scored in the bottom of the first on a Williams double. Despite the weather delay, PEFYA continued to heat up. Jordan Smith doubled and scored in the second for the team's third run.

PE Farmville scored eight runs in the bottom of the third. A single by Williams started a string of 40 consecutive at-bats by PEFYA between strikeouts.

The PEFYA All-Stars wasted no time in getting on the board with an eight-run inning in the bottom of the first. Prince Edward Farmville completely cycled through the 12-man portion of the line-up in the top half of the first.

It's hard to imagine, but the defense set the tone, in the game. Williams, who started on the mound, made a run-saving play at the plate after a wild pitch got past Cooke.

PE Farmville made a number of aggressive defensive moves that resulted in the pick-offs of several Dinwiddie runners.

Prince Edward Farmville has proven two things over the first four games of the tournament. First, it likes to get games over in four innings, and the PEFYA All-Stars like to win by an 11-1 score. For the third time in four games, they recorded an 11-1 victory – this time over Charlotte County on Monday night.

Prince Edward scored its runs in bunches. Three runs crossed the plate in the first, four in the third and four more in the bottom of the fourth. Charlotte scored its only run in the top of the second.

Through four games, Prince Edward Farmville has out-scored its opposition 46-6, and put together an incredible string of 40 consecutive batters between strikeouts. PE batters have struck out a combined nine times.

Through only 16 innings, PE Farmville pitching has 24 combined strikeouts (1.0 strikeouts per inning), and has given up only 11 hits over that same stretch (2.75 hits per game). The staff has combined to allow just 1.5 runs per game.

Tuesday's scheduled game was to begin at 7 p.m. in Sutherland against tournament host Dinwiddie American, which reached the championship round after defeating and eliminating cross-county rival Dinwiddie National.

Should a deciding game be needed, both teams will play again on Wednesday. The winner of the tournament will move on to the 15th-Annual Dixie Youth Baseball Minors (AAA) State Tournament, scheduled to begin on Friday, July 13, at Parker Park in South Hill.