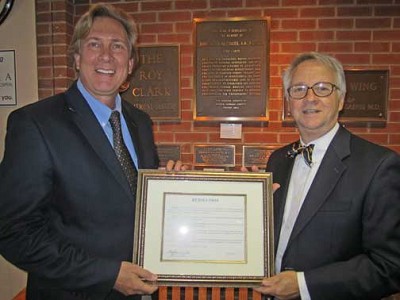 A Resolution was presented to the Centra Southside Board of Directors on April 25, 2012 honoring the service of the late John. D. Wilson.

Wilson, elected to the Board of Directors of SCH on January 28, 1969, devoted over thirty years of service as a member of the Board of Directors. Mr. Wilson was also recognized for service not only to the Hospital, but also to his church, community services, and civic organizations. The resolution also stated that Mr. Wilson's wise counsel and unselfish service would be missed by all at Southside Community Hospital. His influence on SCH was invaluable. Presenting the Resolution to Francis Wood (left), is Centra SCH Board Chair Dr. Stephen Keith. The resolution was adopted unanimously by the Board.

High Bridge Trail State Park welcomes the community to the wonderful world of Lepidoptera. On Saturday, July 7, at 11... read more