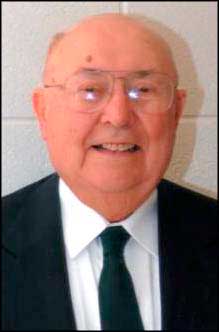 CUMBERLAND, July 24 – Reverend Dargan Bolton Lucas, 92, of Cumberland, departed this life on Saturday, July 21, 2012. Born April 13, 1920, in Fincastle, he was the son of the late Walter Cebastian and Bessie Pearl Bolton Lucas and the ninth of 10 children.

He graduated from Bridgewater College in 1944 and received his Masters of Divinity from The Southern Baptist Theological Seminary in Louisville, KY, in 1948. While serving as associational missionary in the Shenandoah Association, he met his future wife, Beverly Hammond Lucas, who was his partner and helpmate in his ministry for 58 years before her death in 2004.

Rev. Lucas, often referred to as the “Cumberland community chaplain,” loved people, loved his community and loved to “give back.” He was a life member of the Cumberland County Ruritan Club as well as the Cumberland Rescue Squad, where he served as Chaplain. He was very honored to be named Squadman of the Year in 2006. A fifty year Mason, he was a Master Mason, Cumberland Masonic Lodge #283, a 32nd Degree Mason, and member of the Southside Shrine Club. Throughout the years, Rev. Lucas was active in the Baptist General Association of Virginia serving on many boards and committees. He was especially proud of his affiliation with the Virginia Baptist Children's Home which continued until his death.

Viewing will be held on Friday, July 27 from 6-8 p.m. at Dunkum Funeral Home.

Funeral services will be held at the funeral home on Saturday, July 28, at 11 a.m. Interment will be at 3:30 p.m. at Trinity Cemetery in Daleville.

Memorial gifts may be made to the Cumberland County Rescue Squad, P.O. Box 171, Cumberland, VA 23040.