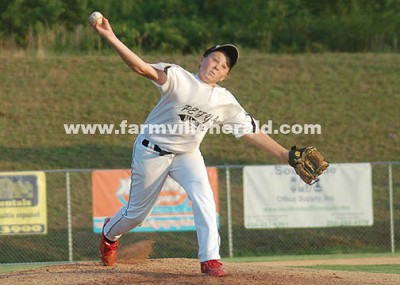 SOUTH HILL – Thought to still be a year away from being a major contender at the state level, the Prince Edward Farmville Major League team certainly lived up to those expectations with a 2-2 run and a Final Four finish in the Dixie Youth Baseball Major League State Tournament over the weekend.

“It was a good run for us,” said PEFYA manager John Adams. “This is a young team, and many of them will be back next year. You can't place a number on the amount of experience they got this weekend.”

The Prince Edward Farmville Youth Association All-Stars got off to a good start with a strong finish in their 10-1 victory over Buckingham – the second place team out of District IV.

Buckingham, which was making its fourth-consecutive appearance in the state tournament, played their neighbors from across the Appomattox toe-to-toe for the first four innings.

Starting pitcher Christian Williams gave up just one run in three innings, before PEFYA pulled away in the fourth after Williams had left the mound.

Williams was effective. Tanner Cyrus led off the game with a double and later scored, but Williams stopped any additional damage by PE Farmville with a strikeout to end the inning.

Meanwhile, PE Farmville starter Gabe Jenkins was just as effective. He retired the first four batters he faced, before giving up a solo home run to Daniel Brickhill to tie the game. Tyrek Glover singled and moved to third, before Jenkins escaped further damage with a strike out.

After giving up a double to Chance Sprouse to lead off the third inning, Jenkins struck out the side.

Prince Edward's second time through its line up proved to be more productive.

Christian Adams singled and Austin Mahan and Aaron Weese loaded the bases on a walk. Adams scored on a walk to Henry Lutz. Mahan, Weese, Lutz and Corbett Bowman and Jenkins managed to score in a fourth inning that saw 12 PE Farmville batters at the plate.

Pitching in relief Tanner Cyrus shut down Buckingham from the fourth inning on. Brycen Newby managed a two-out single off of him in the fourth, but Cyrus got out of the inning with his second of five strike outs on the afternoon. Jenkins and Cyrus combined for ten strikeouts.

PE added three more runs in the bottom of the fifth. Weese (walk), Lutz (double) and Bowman (single) all scored.

PE Farmville moved into Sunday's winner's bracket with a 12-2 victory over Emporia Greensville.

As was the case in its game against Buckingham, PE Farmville did most of its damage after the fourth inning.

After a quiet second, Clay Osborn turned a single into a run in the third, and the PEFYA All-Stars started to pull away in the fourth, as Weese and Lutz scored.

PEFYA added two runs in the fourth to score Weese and Lut, and four runs in the fifth. Clay Osborn, Austin Mahan, Drew Osborn and Weese all scored to give PE Farmville a commanding lead.

Cyrus, Adams and Mahan added three runs in the sixth to take the ten-run victory.

Adams was 3-3 with the home run, while Mahan was 2-3 with three runs scored.

“Looking at this game, we felt we were the underdogs in everyone's eyes,” said Adams. “We wanted to come in here and represent District V with a good performance, and we did that.”

PE Farmville scored a run in the top of the first. Clay Osborn doubled and scored on a passed ball.

Jenkins kept Goochland batters off balance over the first two innings. PE Farmville let two prime scoring opportunities slip through in the second and third innings. PEFYA left two runners on base in the second, and left the bases loaded in the third.

That was enough of a crack to allow Goochland to slip through. The bottom of the Goochland line up started a five run rally that quickly switched momentum.

“We had that one bad inning,” said Adams. “Their rally started with an error, and we were lucky to stop it at five runs, as they were in the heart of their line up. Otherwise, we played about as well as we could against a very strong team.”

PE Farmville and Dinwiddie National, two of the three District V representatives at the state tournament, did not meet in the district tournament, but the two clubs were familiar with one another.

Dinwiddie National showed that it had done its homework from the first pitch that was lined sharply into right field for a double. DN scored four runs in the first and six runs in the second to take a very comfortable lead.

Meanwhile, PEFYA's first six batters were retired in order. Weese led off the top of the third with a single. Bowman and Matt Osborn followed with singles, but PE Farmville was able to do minimal damage. Weese scored when Jenkins reached base on a fielder's choice, but after the three singles, the ball never again left the infield.

Dinwiddie National added three more runs in the third to push the game into a slaughter rule situation.

On the mound, Cyrus retired DN in order in the bottom of the third, before PE Farmville attempted a rally to stave off elimination. Adams doubled, and Hunter Travis was hit by a pitch and Drew Osborn walked to load the bases. The game ended when Lutz grounded out to the catcher on a ball that should've been ruled a foul, as it never left the batter's box, but that was just another on a list of things that didn't go right for the PEFYA All-Stars – either of their own doing, or by Dinwiddie National.

“A lot of people thought Dinwiddie National was the best team at the District V Tournament, and they've done nothing to prove them wrong here,” said Adams. “We've probably played the two toughest teams in the tournament back-to-back, and Dinwiddie National has a good chance to win two in a row to win the whole thing.”

PE Farmville was a team comprised of a number of first-year players on the Major League level.

“We will get a lot of kids back for next year,” said Adams. “Most everyone has two years of experience at this level now. Even the ones that will move up from the Minors will have the same, so I expect nothing but great things to come from these kids in the future.”