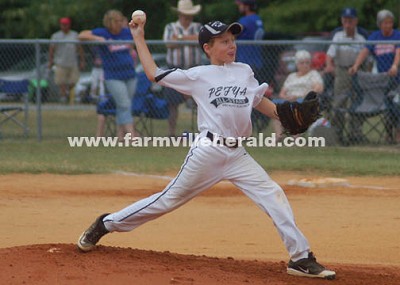 The PEFYA All-Stars are 2-1, and were leading Lunenburg 1-0 in the bottom of the third inning on Monday night in an elimination game when heavy storms moved through the McKenney area, rendering Elder Field unplayable.

Prince Edward Farmville defeated Blackstone 21-6 in three innings in Friday's opening round game, and downed Lunenburg 10-0 in four innings, before losing to Dinwiddie American 17-3 in four innings in Sunday's game between the two remaining undefeated teams in the tournament.

With three available spots in the Dixie Youth Baseball Major League State Tournament, PEFYA can still get into the field with a loss to Lunenburg, and could still not make the state field with a victor, depending on the outcome of the other half of the Final Four bracket.

Should Dinwiddie National, which lost 1-0 to Dinwiddie American on the tournament's opening day, defeat DA in their rematch, the three remaining one-loss teams will advance to the District V Tournament Finals, and also receive the three bids into the State Tournament.

Should Dinwiddie American eliminate DN, the loser of the PE Farmville/Lunenburg game will play Dinwiddie National in a play-in game to determine the district's third place team.

The PEFYA All-Stars scored six runs in the first inning, 13 in the second and two more in the third in the victory.

PE Farmville took advantage of seven walks issued by Blackstone pitchers, but the PEFYA All-Stars also showed themselves to be an offensive force.

Austin Mahan led the PEFYA All-Stars with a 3-3 performance that included a two-run home run that scored Christian Adams. Tanner Cyrus was 3-3 with a walk and four runs scored.

Cyrus pitched the first two innings for PE Farmville. He gave up four runs on two hits, walked four and struck out two.

Cyrus may have been just a little off in Friday's game on the mound against Blackstone. But it was his dominating performance on the mound in Saturday's 10-0 victory over Lunenburg that showed that the right-handed off-speed pitcher had another gear.

Cyrus tossed a four-inning complete game against Lunenburg. He gave up just three hits and walked none in the shutout victory, while striking out four.

Then, in the fourth inning, the PEFYA All-Stars went to work on offense.

Ahead 3-0 heading into the bottom of the fourth, Drew Osborn and Gabe Jenkins reached base on walks, and Aaron Weese loaded the bases on a bunt. That set up Corbett Bowman, who despite batting ninth in the order, belted a grand slam home run to give PEFYA a commanding 7-0 lead.

After Cyrus walked to reach base and Clay Osborn reached on an error, Austin Mahan loaded the bases. A walk to Henry Lutz scored Cyrus, and Drew Osborn, who started the inning, ended the game with a two-run double.

PE Farmville managed just five hits, but took advantage of 10 walks issued by Lunenburg pitching. Case in point, Cyrus' batting line was 0-0, but he turned three walks into a pair of runs. Weese scored twice, going 1-1 with a single and a hit by pitch.

Though they're on the young side of the 11-12 year-old-ledger, Prince Edward Farmville's bats always give the team a puncher's chance, even when it goes against veteran-heavy squads like the two Dinwiddie teams.

Still, it's easy to get overwhelmed. That was the case in Sunday's 17-3 loss to Dinwiddie American in four innings.

Dinwiddie American jumped on top of PE Farmville with five runs in the top of the first, another three in the second, one in the third and eight in the fourth to give PEFYA its first loss of the tournament.

Down 5-0 heading into the home half of the first, PE Farmville crawled back into the contest on a two-run home run by Austin Mahan that scored Christian Adams.

Down 9-2, PE Farmville had a chance to get back into the game in the bottom of the third. With two out, and Tanner Cyrus and Clay Osborn on, Mahan almost cut Dinwiddie American's lead to four runs. A monster shot that looked to be as big as the one he belted at least 30 feet over the left field fence in the first inning, died in the humid air. The long fly ball was caught just in front of the wall for the third out.

The quick switch from celebrating a home run to grabbing the gloves proved to be too much for the PEFYA All-Stars. Dinwiddie American took full advantage of the deflated PE Farmville team, and more or less put things away with eight runs in the top of the fourth.

Prince Edward Farmville's Monday night elimination game was postponed due to heavy showers that moved across the area as the PEFYA All-Stars batted in the bottom of the third inning.

PE Farmville scored its run in the bottom of the second. Aaron Weese walked and came around to score on a single by Corbett Bowman.

Prince Edward Farmville had left the bases loaded in the bottom of the first, but was unable to take advantage of three walks issued by Lunenburg pitching.

Dixie Youth Baseball rules kept Tanner Cyrus from the mound in Sunday's loss to Dinwiddie American, but he picked back up where he had left off against Lunenburg pitching in Saturday's 10-0 victory.

Through three innings, Cyrus had allowed just three runners on base, and struck out six of the nine batters he faced.

AMELIA – It must be July. The Buckingham County Major League All-Stars have secured a berth in the Dixie Youth... read more