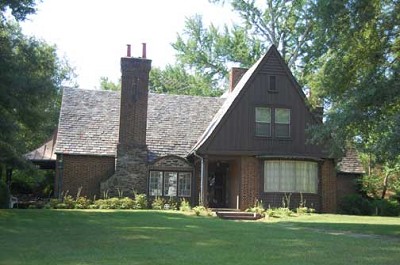 FARMVILLE – No decisions have been made but Longwood University is wondering what best use can be made of its property on High Street at the corner of Watkins Street, the Tudor home across from LU's bed and breakfast.

Two possibilities discussed so far are using the two-story home as space for the Cormier Honors College program or as a Center for Academic Faculty Enrichment.

Both are regarded on campus as uses that would not disturb the personality of the neighborhood.

The university stirred up a hornet's nest reaction among residents on High Street and The Avenues five years ago when plans were announced to create an alumni center on the property.

Longwood took that angry reaction so to heart that in March the Board of Visitors officially amended LU's master plan to house the alumni center in the basement of the Blackwell building on campus.

The Board of Visitors and the university have now begun contemplation to re-think possible uses of the High Street property.

“We were basically tasked with, alternatively, what do we do with the house,” Ken Copeland, then-executive director of the Longwood University Real Estate Foundation, told The Herald this month. “Obviously we could sell it.”

But at a loss.

“We bought it in 2007. If we try to sell it now, we're going to take a bath,” said Copeland, who was named last week as LU's new Vice-President for Administration and Finance.

Longwood currently has a tenant living in the residence, the university's director for facilities.

“And he's handy so he keeps us abreast of what's going on in the house. It's an old house; it needs TLC,” Copeland said. “He'd doing that for us.”

As for the structure's future, Copeland said, “two things have come out that are potential uses. And there's no real-it hasn't congealed yet. But one of them is the Cormier Honors College needs a permanent home.”

The honors college program is now in a house on Pine Street but that space only accommodates offices for the program.

Filling that void is “one potential use,” he said.

The university is evaluating the ways in which other universities provide space for their own honors students.

“We're looking at what some other schools have done as far as accommodating-where there is an honors college, what do they do for their students to kind of give them some space that's set aside,” Copeland explained. “So that's one possible use.”

The other thing that came out of the master plan, he continued, is “that we really never identified a specific location for…a CAFE concept, a Center for Academic Faculty Enrichment. It's a faculty development center.”

Longwood has talked about space for faculty development “but we never really identified a space on the main campus…where that could ultimately land. So we're looking at that as well, trying to do some homework with some other schools that offer that program-what types of space do you actually set aside for faculty enrichment. I assume you would want a full-blown, all the bells and whistles type of an educational classroom.”

Copeland added that he doesn't “know that there's space in the house as it exists to do that-but can we do an adapted re-use? Yeah, probably. So those are the two things.”

And actually a third potential use was brought up-additional space for the bed and breakfast.

But, Copeland points out, “I kind of poo-pooed the idea (of) an annex for the B and B.”

Not on a whim. The Longwood bed and breakfast has been renovated and the Tudor house across the street would not offer the same basic accommodations.

“Now the B and B, we've renovated the interior of it. Every bedroom now has a private bath. If we try to annex it and use the house across the street for overflow we don't have that. All the bedrooms are upstairs, which all but two of the bedrooms at the existing B and B are upstairs, but we don't have private bathrooms (in the Tudor house),” Copeland said. “You'd have to go in and change the interior integrity of the house pretty significantly if you went that route, so I don't think that's the way to go.”

Creating a B and B annex would likely also be the most expensive of what would then be three alternatives.

As for the prospects of additional B and B space in the residence being a viable option, Copeland evaluated it, saying, “while that one is not totally dead, I'd say it's on ventilator.”

Copeland is quick to emphasize, for the benefit of the neighborhood and Farmville community, that “there's no hard and fast decision.

“For the time being we're going to continue to rent it, maintain it, keep it up, make sure that the yard stays looking nice so the townspeople don't say Longwood's bastardizing High Street,” he said. “Then we'll just keep on keeping on. That's the idea for now, anyway.”

CUMBERLAND – Alright folks, shine those bikes and get your riding boots out-there will be a bike show, rodeo, and... read more