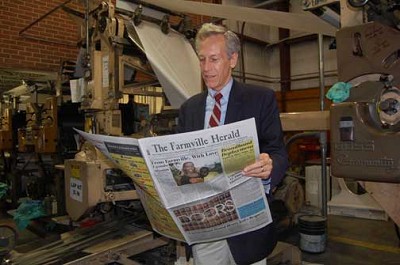 Goode To The Last Drop

Virgil Goode hopes voters wake up feeling hard-boiled on November 5, recognize they are fed up with the two-party menu, and vow to select someone a la carte on the next day's election menu.

Denying he is Don Quixote pursuing an impossible dream, the former Fifth District congressman won't concede he has no chance to be elected President of the United States of America and bring the Constitution Party its first White House resident.

He does recognize, however, that the odds are against him and running mate, outgoing party chairman James N. Clymer, of Pennsylvania.

“I'm not saying I'm Don Quixote. Let's just say I'm a very long shot,” he said during a Tuesday afternoon interview with The Herald during a tour of the Farmville area, the geographic center of his old congressional district, accompanied by a reporter from Time Magazine.

Goode has already collected over 14,000 signatures on petitions in Virginia-way over the 10,000 required to get his name on Virginia's ballot in November-and has earned a spot on the ballots of 17 states. More will follow, he is certain, but not all of them. Ballot access rules differ from state to state. Some easy. Some, for him, unattainable. The Constitution Party was on the ballot of 35 states in 2008.

Campaign priorities as summer slips into autumn include Virginia, Pennsylvania, Michigan, Ohio and Florida, with a western swing also planned.

Given an impromptu opportunity to dramatize a 30-second television ad telling Americans why they should vote for him, Goode didn't hesitate: “First of all, a balanced budget now, rather than later. Secondly, secure the borders. Bring jobs by ending illegal immigration, reducing legal immigration. And lastly, term limits.”

The Rocky Mount lawyer, who at 27 became the youngest-ever member of the State Senate in 1973, believes he will pull votes away from both President Obama and his GOP challenger, Mitt Romney.

Political pundits believe he may help tip the Presidential election, but not toward himself. The scenario some predict sees Goode pulling enough votes away from Romney-perhaps polling nine percent in the Commonwealth-to nudge Virginia, and a close national election, in the president's favor.

“We hope and expect and know we'll take votes from both Obama and Romney. There are a lot, particularly in Southside Virginia, of old line Democrats who won't vote for a Republican under any circumstance,” he said. “We expect to get some of them.”

The other party is ripe for picking too, he believes.

What are Americans talking about most on the campaign trail?

“Dissatisfaction with both candidates,” he answers. “Obama and Romney.”

Just supposing the snowball survives its chance in hell and Goode were to win, the candidate doesn't believe he would be stonewalled by Republicans and Democrats in Congress, united against a third party usurper to America's throne.

Even though both parties try and sabotage the presidential terms of the rival party.

“What I think you would see occur,” he predicts, is something different. “You've got now, when Bush was in (office) the Democrats did everything they could to make him look bad, especially when he was going to run for reelection. And with Obama, Republicans are doing all that they can to make him look bad, to hurt him in the election. They wouldn't have that motive against me because, first of all, I wouldn't be a Democrat or a Republican. I'm not going to be out there beating the drums to elect more Republicans or beating the drums to elect more Democrats. My one goal is to do what's best and right for the country.

“You wouldn't have that dynamic,” said the man who served in Congress as a Democrat, a Republican and, finally, an Independent, “which in and of itself would be a real plus…I'm not going be out there campaigning on the basis of party, which is not the case now.”

Though the political game in Washington, D.C. is so thoroughly about preserving individual and party power, Goode thinks his presidency would break through all of that, even though his promise to serve one term would tempt both parties to resist his promised changes regarding the federal budget, term limits and both legal and illegal immigration.

“That's a possibility,” he acknowledged regarding no cooperation from either party in Congress, “but I think a very unlikely scenario. I think the scenario would be the public fed up, to a large degree, with both Democrats and Republicans. And I think they (members of Congress) would say, 'Well, let's see what we can do for the country. He's not going to be out here trying to promote one party over the other, give the other a leg up in the election over the other one.'”

In Congress now, he said, it's all about getting elected and staying elected. That's the perpetual goal.

And he's for term limits in congress.

“For long-range that would be the best thing for the country because the focus when you get elected-I mean, I was part of it-immediately they want you to start raising money…When's your first fundraiser going to be? How much money can you raise?”

Members of both parties are told by leadership to invite the PACS and Big Money to fundraisers “and get as much money as you can. Both sides have a constant focus on raising money. I didn't like that aspect of Congress. But, as you know, spending money in elections is the key, in many instances, to winning,” he said.

That key won't be on the chain he brings from his pocket to unlock the White House door, however.

Goode is accepting no PAC money and even individual donations are limited, by him, to no more than $200.

Though not embracing the Don Quixote analogy, he does answer without rephrasing the question when asked, what do the windmills look like?

“You've got too much big money controlling the Democrats and Republicans. The average citizen knows that. If they look around and say, 'Well, you know we just might send them a message this year' then they're going to look at me. I'm not taking any PAC donations, not taking large individual donations.”

Goode has envisioned the shockwaves his victory would have on the political establishment in the nation's capital.

But doesn't that confirm the notion that Republicans and Democrats would unite, in fear and loathing over losing their power, and keep a President Goode from accomplishing anything, just to send a 'no trespassing' message to other third party candidates?

“I tell you what,” he said, “I bet, I know there were a lot of members up there (in Congress) like me that really found just constantly raising money distasteful. It's always 'Where's the next fundraiser going to be?'”

There are few exceptions to the fundraising treadmill-someone in a totally safe (for them) district or the chairman of a congressional committee.

“If you were a committee chairman, just go ahead and hold a golf tournament and every interest that is before that committee we're going to make sure they get a ticket to come to the event. That's basically the way it is,” he said. “I mean, if you were chairman of the defense committee, all the defense contractors were going to be right there, writing the max check that they could write just to play the golf round. Hopefully they got to shake your hand.”

And they hope to shake policy decisions in their direction, too.

“For, really, the good of the country that needs to change. And I think the average citizen agrees with that,” he said, illustrating his point by talking about that committee chairman getting two phone calls at the same time-one from a major PAC donor and the other from an ordinary constituent.

“The guy that wrote the big check for the golf tournament, or Joe Smith, calls up the chairman of the defense committee-which call is he going to take first?” Goode asks, knowing the answer doesn't need to be articulated to be obviously true.

Goode is on his soapbox now, his voice rising.

One wonders-throw ego and vanity out of the equation-if the chance to get on a national soapbox, to gain the largest possible audience for policies he truly believes in, makes the time, travel, and campaign testing worthwhile.

“That's a factor, absolutely,” he admits, “but I also think we've got a very slim chance of winning.”

So, of course, did Don Quixote when he tilted against those windmills.

“The public, this might be the year they wake up,” he continued. “You don't have the opportunity but once every four years. If you don't wake up in a presidential election you're never going to wake up.

“They may wake up,” he said, the longest-odds-against screenplay continuing to project its footage in his imagination, “and roll over on November 5 and say, 'You know what? I'm tired of the multi-millionaires, billionaires running this country. I'm going to go out there and vote for somebody different tomorrow.'”

To achieve that implausible dream, Goode will keep his attitude sunny-side up because he knows it won't be over easy and even the best laid plans of mice and politicians are easily scrambled.

The interview finished, he leaves to collect more petition signatures in Farmville, making certain his name is on Virginia's ballot.

There are votes, he believes, to poach from Obama and Romney.

State Waiver Will Have Local Impact

PRINCE EDWARD – Virginia has its waiver from the U.S. Department of Education for flexibility under what is now known... read more