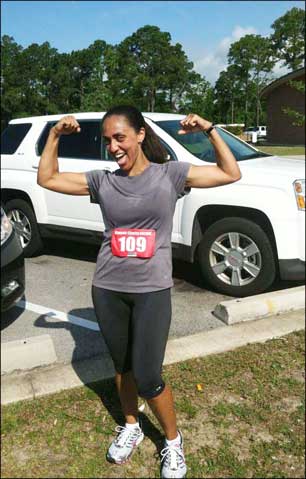 In 2009, Fernita gave birth to her fourth child, Robert Burwell III, (Robbie), who was born with a Ventricular Septal Defect, and required open heart surgery. Robbie was admitted into Johns Hopkins Children's Center, in Baltimore, MD, and received the surgery at two months old, weighing less than ten pounds. Robbie is now two years old, and is in good health. He has annual follow up visits with his pediatric cardiologist, Dr. Joel Brenner, M.D., at Johns Hopkins Children's Center.

Today, Fernita runs road races to support children in need. She and her family are big supporters of the Children's Miracle Network (CMN) Hospitals. She is a member of Mikala's Miracle Team, consisting of five runners who are all supporters of their local CMN Hospital, Johns Hopkins Children's Center. The team will be participating in the 2012 ING New York City Marathon, one of the world's great road races, on Nov. 4 in support of the CMN. Her goal is to raise $2, 500 for the Children's Miracle Network Hospitals.

She is solicitying donations to help reach her goal as she prepares to run 26.2 miles through New York's five boroughs in support of the Children's Miracle Network Hospitals. Email fernitaburwell@gmail.com. To help.

All donations are tax deductible, and appreciated.

Frank and Ellen Baber, of Cartersville, are celebrating their 60th wedding anniversary on August 2. Their children are Frank Baber,... read more