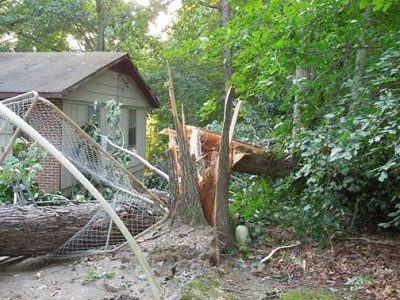 Few people knew the word existed prior to Friday night's devastating storm that swept Virginia and the mid-Atlantic states.

“I was at Cumberland at my grandson's all-star game Friday night,” Buckingham County Administrator Rebecca Carter said Monday, “and it was just like all of a sudden the lights went out and kids were screaming.”

Derecho is a Spanish word meaning “straight” and, meteorologically, derecho is a severely violent straight-line windstorm with hurricane strength accompanying a fast-paced band of angry thunderstorms.

Originating in Illinois earlier in the day, the derecho hit central Virginia Friday night, damaging trees and devastating power lines across the state and mid-Atlantic region. Many thousands remained out of power as the week began, from North Carolina to New Jersey, westward to Illinois, where the storm originated.

By its definition, a derecho is a huge problem because the straight line of smashing wind and thunderstorms is at least 240 miles long, blown by wind gusts more than 60 miles per hour.

With so many out of power, the derecho's heat waved appearance with temperatures over 100 degrees during the day came at the worst possible time.

Area counties opened cooling centers on Saturday and Sunday but most people looked after themselves, their loved ones, and neighbors, especially the elderly, who might need help coping with the heat.

“The County opened the shelters pretty quickly,” Cumberland County Sheriff Darrell Hodges said Tuesday morning. “And we were able to get a couple of seniors there who needed assistance, like with oxygen and stuff like that, who didn't have power and who were able to get into those facilities which, with this heat, of course, was a life-saving thing, to be honest with you.”

The Southside Virginia Family YMCA opened on Sunday to allow those without power to shower.

There were no requests for overnight shelter in Prince Edward County, according to county administrator Wade Bartlett, but such shelter would have been provided if needed.

“We had a cooling shelter at Maysville Church on Saturday,” Carter said of Buckingham, “and yesterday we had a cooling station opened up at the middle school to provide water and ice and we had no takers any day, no one.”

On Monday morning over 800 Dominion Power customers were still without power in Buckingham and downed Central Virginia Electric Cooperative lines added to the number of residents coping without electricity in a time of extreme heat.

Tuesday morning dawned without everyone finding their electricity back on.

“In Buckingham people kind of look after each other and look after their neighbor,” Carter said.

Everyone's biggest worry was the elderly, the disabled and those with health issues that the heat would affect, Carter said. “Everybody's been checking on their neighbors.”

The Town of Farmville, meanwhile, was largely spared problems from the derecho.

“We came through pretty good,” Town Manager Gerald Spates said Monday. “We have just a few people that are out of power. We notified (the power company) but all in all we fared out pretty well.”

States of emergency were declared in Virginia, Maryland, Ohio, West Virginia and Washington, D.C. as the derecho tore across a 500-mile swath, claiming the lives of 15 people-10 of those in Virginia-and knocking out power to more than three million.

Over one million Virginians lost power, with the storm having a hurricane-like effect.

In Virginia, 20 primary roads and 201 secondary roads were closed by downed trees or limbs, according to the governor's office.

There were several local reports of trees on fire due to fallen power lines Friday night.

“Just like everybody else we had a tremendous amount of wind damage,” Sheriff Hodges said of Cumberland. “And I was very proud of how the community, all the volunteer organizations, all came together. We had fire department members, rescue squad members, deputy sheriffs off-duty, people coming in to help clear the roads.”

The mess and debris were devastating in some communities, with 36 Virginia localities declaring their own state of emergency, with the Virginia Department of Emergency Management coordinating delivery of water to Charlottesville and Albemarle, Allegheny, Bedford, Botetourt and Page Counties.

Virginia National Guard personnel were called into Fredericksburg and Lexington.

One local business that operates in much of the area affected by the storm can attest to the widespread damage.

The Buckingham Branch Railroad had to remove more than 300 trees from its lines, most of them between Gordonsville and Clifton Forge, with the greatest damage between Charlottesville and Afton, the company said Monday. The financial impact was estimated to be in excess of $500,000.

Virginia's state parks did not escape unscathed either, though most were ready on Monday for Fourth of July visitors.

Holliday Lake State Park in Appomattox was one of three state parks that lost electricity and was still closed as of Monday, with James River State Park having electricity restored Monday afternoon and scheduled to reopen on Tuesday, July 3.

State parks officials said Holliday Lake State Park would reopen as soon as electricity is restored, which could well be in time for the Fourth of July (check with the park or online at www.virginiastateparks.gov).

The storm was no day at the park Friday night.

Buckingham's County Administrator experienced the hazardous driving back from the aborted all-star game from Cumberland.

“It was a mess coming home,” Carter said, “but everyone went through it safe, and that's the biggest thing…