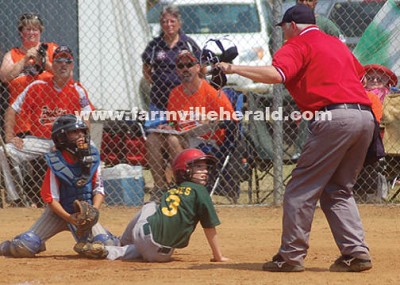 CUMBERLAND – Wednesday morning's back-and-forth District IV Minor League Championship game, played at Cumberland's Madison Ballfield, had all the feeling of a game where the last team at bat was going to come away with the victory.

Unfortunately for the Buckingham County All-Stars, they were the visiting team. Tied going into the bottom of the sixth inning, Powhatan American needed just two batters to score the game-winning run.

The PA All-Stars will now move on to face District V Champion Prince Edward Farmville on July 20 at the DYB AAA State Tournament in South Hill.

“I really started to get that feeling midway through the game,” said BC All-Stars manager Charlie Allen on how the game was going to play out. “Unfortunately, we didn't have that last at-bat.

“Still, I'm proud of what this team was able to do. We had some weaknesses we were able to overcome, and we came close to winning the whole thing.”

Powhatan, which defeated Amelia on Tuesday night to reach the championship game, jumped out to a 5-0 lead, before Buckingham rallied with six runs in the top of the fourth to take the lead.

Ayers knocked in a run and later scored along with Allen on a two-RBI double by Kelly. Base running errors in both innings kept the Buckingham rallies from being bigger than they could've been.

Powhatan scored a single run in the bottom of the fifth to tie the game at 9-9. Buckingham put two runners in scoring position with just one out in the top of the sixth, but was unable capitalize on the situation.

That gave Powhatan the opportunity it needed. Nathan Stettler reached base on an error and raced around to third, and was knocked home on a Benjamin Allanson RBI single to send PA to the victory.

“Errors plagued us in the tournament,” said Allen. “For the most part, though, they were errors of aggression. I can deal with those. Errors that happen when you're not trying are a different thing, but kids are going to make mistakes, and when those mistakes come about when they're really trying to make something work, you just try to correct those for the next time.

“We had gotten off to slow starts all tournament. Today was no different. After one time through the battling line-up it clicked that we could play with our opponent. Once we did though, our hitting was pretty solid. Our defense didn't seem to be as strong as we are used to, and our pitching was a little shaky, but they found a way to get to the finals. They hustled, and that's what is most important at this level. I'm really happy with the whole group and what it was able to accomplish. We should have a good foundation to build on for next season.”