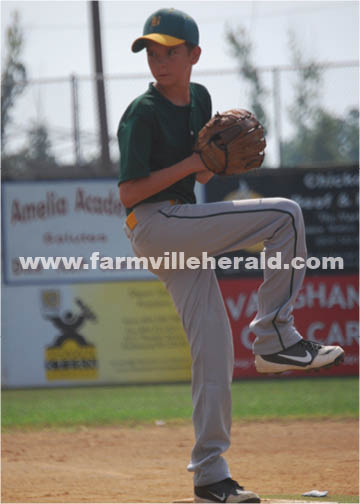 AMELIA – It must be July.

District IV teams receive two bids into the state field this year, and by reaching the finals of the tournament, Buckingham already knows its season will last a few more weeks.

The BC All-Stars were scheduled to play undefeated Goochland on Tuesday night at 7 p.m. and must win twice in order to capture the District IV crown.

Buckingham started the tournament with a 7-1 victory over Cumberland, before dropping a 15-5 decision to Amelia on Friday.

The Buckingham All-Stars rebounded with a 13-2 victory over Powhatan American on Sunday.

By virtue of Goochland's 12-2 victory over Amelia on Sunday, Buckingham was able to watch as Goochland and Amelia battled on Monday night to decide how the remainder of the five-team, double-elimination bracket would fall out.

It fell out correctly for Buckingham, and now, regardless of what happens on Tuesday, and possibly Wednesday, the Buckingham All-Stars are headed back to their third consecutive Major League State Tournament.

Last year, Buckingham earned the third seed out of the District IV field, but overcame major odds to move into the championship round, before losing to defending and eventual State Champion Charlotte County by one run.