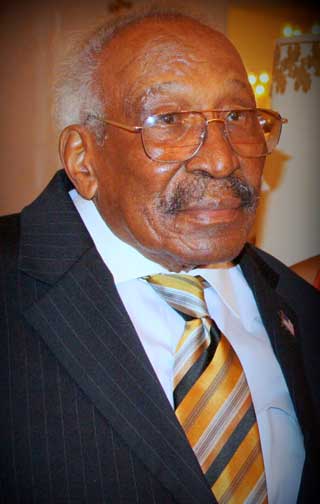 BUCKINGHAM, July 10 – Allen Cortez Gooden Jr. was born in Birmingham, Alabama on September 19, 1914. He was one of seven children born to Allen Gooden Sr. and Jenny L. (Jones) Gooden. He was educated in private and public schools in Birmingham and graduated from Industrial High School. Mr. Gooden attended Alabama State Teachers' College (now Alabama State University) in Montgomery, Alabama and graduated in 1937. He earned a Master's degree in Education Administration from Virginia State College in 1965 and pursued additional graduate studies at the University of Arizona, Pennsylvania State University, University of Virginia and Columbia University.

Mr. Gooden honorably served as a Staff Sergeant in the United States Army during World War II. During his four-year tour of service, he was stationed in Georgia, Missouri, Virginia, Florida, and Arizona. He was deployed with the 1873rd Company of the 5th Army Air Corps. He served as a combat engineer in New Guinea and Okinawa, Japan and was honorably discharged from the Army in January 1946.

While stationed in Virginia, Mr. Gooden met and married the love of his life, the late Christine Shelton Gooden. They were united in holy matrimony on April 5, 1944 and remained married for 57 years until her passing in 2001. In 1946, he came to Buckingham County to meet the parents of his wife with the intention of staying for two days. He remained a proud resident for the next 66 years. As a Buckingham resident, he was a husband, father, educator, appointed official, farmer (hog, tree and cattle) and community activist.

Mr. Gooden steadfastly emphasized education and considered it a proud accomplishment that all seven children earned college degrees. Additionally, among his children, their spouses and his grandchildren, you will find Ph.D.s, law degrees (JD) and numerous master's degrees. His children and grandchildren excel in various career fields including law, education, aviation, engineering, nursing, business, agriculture and the military.

His commitment to educating “all” of Buckingham County's children was foremost in his goals throughout his years in the county. His service of more than 30 years as principal ranks him as one of the longest serving principals ever in the county. As principal, Mr. Gooden was very strict as he emphasized student respect toward self, toward others and for their community.

In addition to his role as a principal, Mr. Gooden was a blessing and inspiration many through his service to his community. He was active and loyal in supporting Boy Scout activities statewide. He was appointed by Governors Charles Robb, Gerald Baliles and L. Douglas Wilder to serve on the Virginia State Board of Social Services. He served in this capacity for 12 years. Mr. Gooden was a member and president of the Board of Directors for Central Piedmont Action Council (C-PAC), now HOPE Community Services. He was a member of the Buckingham Correctional Center Community Advisory Board; the Board of Directors for New Dominion School; member and president of the Board of Directors for Central Virginia Community Health Center; member and Chairman of the Board of the Buckingham County Social Services Department where he served for eight years; and a board member of Farmers Home Administration; and an advisor for the Farm Service Agency.

In addition to commitment to education and community service, Mr. Gooden owned and operated a cattle and tree farm, Gooden Family Enterprises, LLC. He was recognized by the Virginia Department of Forestry as a Certified Forest Steward. As one of few minority farm owners in central Virginia, he was prominently highlighted in the book, “Black Farmers in America” in 2006. This book documented the experiences of black farmers and was part of a national exhibit featured at the Blacks in Wax Museum in Baltimore, Maryland. He and his farm were also featured in a television segment of “America's Heartland” in 2009, Episode 308. His military service is proudly presented in an exhibit at the Scottsville Museum in Scottsville.

He loved life, people and educating the youth. When asked about his well-being, he was often fond of saying, “I'm doing as I please.” Although he was blessed to live until the age of 97, he emphasized that, “It's not the length of time you live, but what you do with the life you live.” He often stressed that, “the life you live, speaks for itself.” Reflecting upon his own life, Mr. Gooden often remarked, “I've lived a great life, it's been a good run.”

Mr. Gooden departed this earthly life on Saturday, June 30, 2012. He led a full life as a mentor, father, educator, and strong community activist that indeed speaks for itself.