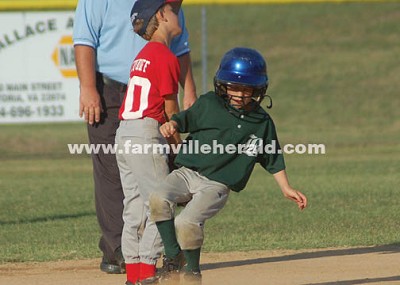 The Prince Edward Farmville and Buckingham AA (coach pitch) All-Stars saw their Virginia State Invitational run come to an end on Saturday at the tournament being played in Victoria.

The two area teams played 6 p.m. games on Friday. Buckingham lost to Amelia on Lenhart Field, and Prince Edward Farmville was unable to get past Madison Heights on Neblett Field.

Prince Edward Farmville, which was one of three teams to advance to the AA Regional last year, eliminated Buckingham on Saturday morning in an 18-3 victory over the BC All-Stars. PE Farmville's run in the 13-team field came to an end on Saturday afternoon with a loss to Amelia.

With ball already in glove (above), Prince Edward Farmville third baseman Ian Wagner waits patiently to make the tag on the runner from Madison Heights in Friday night's game. Jake Simon (right) takes cover as he gets into second base safely, just before the Madison Heights second baseman makes a catch.

Though Buckingham's stay in the tournament was a brief one, the experience gained by this team's two-week preparation and participation in the AA Invitational will be enjoyed for years to come as these players age through the baseball system in the county. Martrell Glover (below) concentrates on fielding a ground ball, and Braedyn Schaeffer (bottom right) kicks up a little Lunenburg dust as he reaches second base safely.

McKENNEY – As tight as things got for the Prince Edward Farmville Major League All-Stars in Tuesday night's 3-2 victory... read more