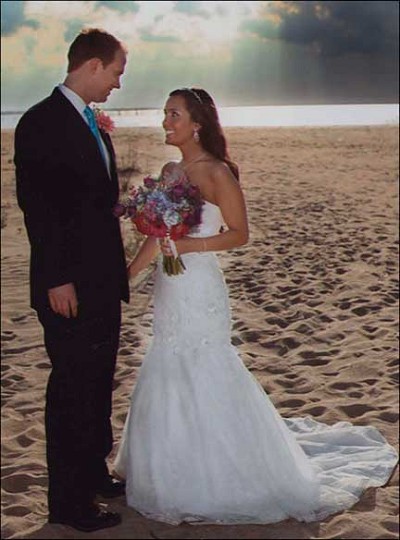 The marriage of Miss Kristina Hartman and Adam Garrett, both of Virginia Beach, took place on Saturday, April 21, at the Old Donation Episcopal Church in Virginia Beach.

The Reverend Sylvia Meadows, aunt of the groom and pastor of Farmville United Methodist Church, along with the Reverend Robert Randall Jr., pastor of the church, officiated.

The bride was escorted by her father and given in marriage by her parents, LCDR and Mrs. Richard Hartman II, of Virginia Beach.

Kristina is the granddaughter of Mr. and Mrs. Richard Hartman, of Wilmington, DE, and Retired Lieutenant Colonel and Mrs. Archie Casity, of Murfreesboro, TN.

The reception was held at the Officers Club at Fort Story, Virginia Beach, and was hosted by the parents of the bride.

After a honeymoon trip to Europe the couple now resides in Virginia Beach.

The bride is a graduate of Virginia Tech and is currently employed by Enterprise.

The groom is a graduate of Virginia Wesleyan College and is currently employed by Arotect, Inc.

A champagne brunch on April 20 by the pool was hosted by Dr. and Mrs. Randall Scarrow, of Phenix; Miss Jenny Landis, of Richmond; and Mrs. Kate Landis, of Central, SC.

A rehearsal dinner was hosted by the parents of the groom at McCormick and Schimcks Seafood Restaurant in Virginia Beach.