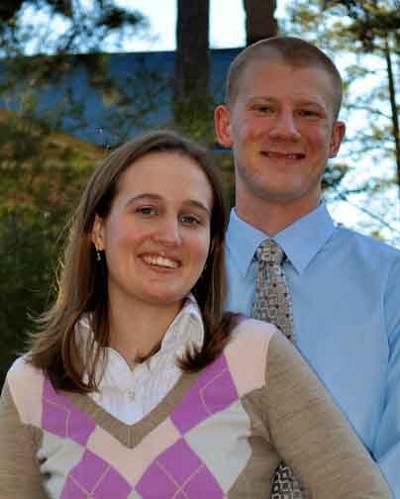 Mr. and Mrs. Douglas Cameron of King George, are pleased to announce the engagement of their daughter, Sarah Marie Cameron, to Andrew Taylor French. Andrew is the son of Dr. and Mrs. Mark French of Farmville.

Sarah is the granddaughter of Mr. and Mrs. Larry Cameron and Mr. and Mrs. James Colvard, of King George. She is a graduate of King George High School in King George. Sarah and Andrew met at their alma mater, The College of William and Mary in Williamsburg. In 2011, Sarah received Bachelor of Science degrees in Mathematics and Computer Science from The College of William and Mary. She is currently a Master of Divinity student at Southeastern Baptist Theological Seminary in Wake Forest, NC.

Andrew is the grandson of Mr. and Mrs. Randolph Wood, of Richmond, and Mrs. Patricia French, of Mt. Washington, KY. and the late Joseph E. French. Andrew is a graduate of Prince Edward County High School in Farmville. He received a Bachelor of Science degree in Biology from The College of William and Mary in 2011. Andrew is currently preparing applications for medical school.

An August wedding is planned in King George.

The other night we watched an intriguing show on television – “Frontier House,” the PBS version of reality TV. In... read more