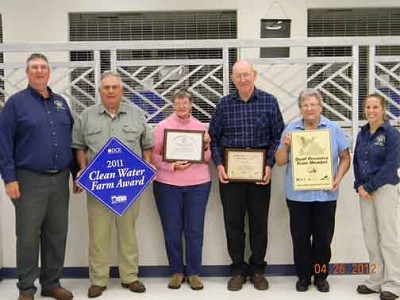 Taking Care Of The Earth

CUMBERLAND – The Peter Francisco Soil and Water Conservation District's annual awards dinner was held earlier this spring and two awards were given to two family-operated farms, Lar-Lynn Farms and the Tillett family farm, and one teacher from Cumberland High School, Angela Whittaker, received the Conservation Education Award for leading the district in sustainability.

Larry and Lynn Nead, of Lar-Lynn Farms, LLC in Buckingham, were the recipients of the Clean Water Farm Award.

According to information provided by Kelly Snoddy, Peter Francisco Soil and Water's conservation specialist, the Nead family moved from Pennsylvania in 2005 and re-established Lar-Lynn Farms. It totals approximately 55 acres, which includes 30 acres of hay and pasture, six acres of woods, five and a half acres of vegetable production patches and five acres of new land that's currently being brought into production.

The Neads are members of the Buckingham Cattlemen's Association and have structured their herd into a fall calving season.

The family also raises, sells, and shows Haflinger draft ponies, according to Snoddy.

The Neads raise 40 varieties of produce. They include okra, tomatoes, cantaloupe, watermelons, sweet corn, greens, sweet bell peppers, summer squash, zucchini, and eggplant. Every year the vegetable plants are rotated. During the winter months, rye is planted as a cover crop on the farm. All produce is picked, processed, and packaged on site and prepared for sale at several local Farmer's Markets.

They are also members of an online farm to family co-op, according to Snoddy, Fall Line Farms, which connects family-owned and operated farms in central Virginia to customers interested in local foods that are available year-round.

The Neads use mushroom compost, imported from Pennsylvania, as a soil amendment.

According to Snoddy, the farm also grows crimini mushrooms, or baby Portobello mushrooms.

The Wildlife Habitat and Forestry Conservation Award was presented to Jim and Betty Tillett of Cumberland.

The Tillett family enjoys having an abundant amount of wildlife on their property, which is due to their efforts to establish an inviting environment for various species, according to Snoddy's information.

Approximately 250 acres of the Tillett's property has been converted to forestry practices and any open areas are dedicated to wildlife feed patches and recently established wildlife habitat.

Many birdhouses are also located throughout the Tillett property, which provide houses for Blue Birds, Green Tree Swallows and Purple Martins.

The Tilletts, according to Snoddy, also have two hives of honeybees on their property, which assists with natural pollination.

She is the Sustainability and Renewable Technologies instructor at Cumberland High School.

She's been with the school system since 2004 and in 2010 she received her diploma in renewable technology and completed the LEED GA (Leadership in Energy Efficient Design, Green Associate) accreditation in January of 2011, according to Snoddy.

During the past two years, Whittaker has designed and piloted the first two courses in Virginia dedicated to teaching sustainability and renewable energy to high school students.

Whittaker also formed the “Green Team” in the fall of 2010 at Cumberland County Public Schools, which services as the organizing and advisory body for the school's many projects in renewable energy and sustainable horticulture.

The Medal Of Honor

BUCKINGHAM – As they have for the last 22 years, the Buckingham County Ruritan Club hosted a Memorial Day Observance... read more