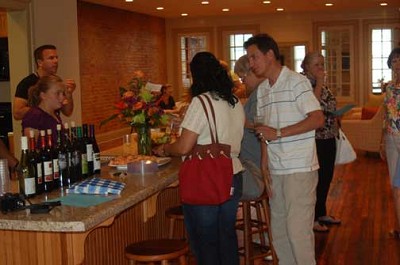 Pam Butler looks at old buildings the way a potter looks at clay. When the owner of Mainly Clay, Farmville's newest downtown business, purchased the building at 217 North Main Street she saw more than an aging two-story structure – she saw possibilities.

“I wasn't looking to buy a building,” Butler recalled. “I didn't even realize the building was for sale, but one thing led to another and I signed a contract the following week.”

Butler's search for a building to house a pottery studio began when she developed an interest in pottery while working for Fuqua School.

“I met Rick Erickson there – he makes pottery and always donated his work to Falconfest (Fuqua's annual fundraiser),” Butler recalled. “I started going to pottery classes that he held at his house in Green Bay.”

Every now and then Butler and Erickson would talk about finding a place in Farmville to hold pottery classes.

“We talked about it, but then reality set in,” Butler said with a smile. “We both said – this is crazy.”

Nevertheless, the idea didn't go away.

“When my children were small they took art lessons, but once they finished that there wasn't much for them to do,” Butler recalled. “All along I've been interested in a place to hold artistic classes.”

Butler began looking at vacant buildings that might have the requirements needed for making pottery.

“I started talking to people and taking notes,” she said. “I talked to Johnson Bowles at the Longwood Center for the Visual Arts, I talked to people up and down Main Street, and I went to the Downtown Merchants Association. There was no manual for how to build a pottery studio.”

Finally, it was Butler's mother who helped her make the decision.

“My mom asked – what did you want?” she recalled. “I told her I wanted to be downtown in the middle of everything.”

The building at 217 North Main Street fit that qualification, but the rest of the requirements would obviously take some work.

“The building was gutted by fire a few years ago,” Butler related. “Fortunately the fire didn't destroy the structure's framework.”

The walls of the building, originally constructed by Emanuel Weinberg, are brick. For many years it housed the Squire Shop, a part of The Hub, Weinberg's clothing store.

Another fire, the disastrous fire of 1926, was also a part of this building's history. Its predecessor was destroyed in that fire along with a whole block of Farmville businesses.

“As soon as the ashes and debris were cleaned, Mr. Weinberg began erection of a new building, one that stands today among the largest and best equipped in Farmville.” (from Today and Yesterday in the Heart of Virginia)

Once Butler signed the contract for the 4,000-square foot building (2,000 square feet on each floor), she began restoration, and at the same time started designing spaces for the pottery studio.

“I bought a slab roller – think wringer washer – to squish the clay through so you have a slab to work with,” Butler pointed out. “All the cabinets came from the Wooden Heart when they went out of business.”

“I really believe in buying local,” Butler added. “We've done that with everything when possible.”

In the rear of the building, a tiled corner with two kilns has replaced a freight elevator while a loading dock at the back entrance provides easy access for deliveries. A spiral staircase now connects the upper and lower floors, providing a fire escape as well as an outside entrance to the upper level.

“We're learning about loading docks,” Butler said. “Last week when 3,000 pounds of clay came in, they rolled it in and the wheels went through the floor. We had to get the floor fixed. Then when we tried to take a countertop upstairs it wouldn't make the turn, so the guys had to take it out one upstairs window and bring it in another one. That was an exciting week!”

“We were just going to have a clean up sink upstairs, but when I talked to John Ellington, who does catering, he wanted me to add a kitchen,” Butler noted.

It soon became apparent that the upstairs space would make an ideal setting for meetings or seminars.

“We can rent it for parties or for shorter term meetings for groups,” Butler said. “John Ellington came up with four menus for either a lunch meeting or a party. We can easily accommodate 35 to 50 people.”

A large screen TV mounted on the wall above the fireplace provide video and PowerPoint access for seminars, and a cozy enclosed room overlooking Main Street offers a quiet spot for small group meetings.

The pottery studio downstairs is, of course, the main attraction of Mainly Clay. Erickson, a retired marine engineer, is resident potter and instructor.

“Rick is a very attentive instructor,” Butler said. “He studied at Hood College which has a stellar ceramics program.”

Many who attended the open house on Tuesday signed up for pottery classes as well. Classes are geared for all skill levels from beginner to advanced.

“Classes are once a week, but you can come back and use the studio any time as long as there's not a class,” Butler noted. “The studio hours are 10 a.m. to 3 p.m., Tuesday through Saturday, but we will also have night classes. We'll be offering a three-day experience that is very flexible and a Saturday “come try it out” class. We're open to what anyone wants to do.”

“I've been blessed every step of the way with this,” Butler added. “Having Amaco as our dealer for glazes is a gift – it's all been awesome.”

Butler is looking forward to introducing the Farmville community to a pastime she finds relaxing, even spiritual.

“The neat thing about making pottery is, it's a quiet activity,” Butler concluded. “Like gardening or caring for animals – it's spiritual. It's that same connection.”

At Mainly Clay the process is obviously part of the journey. Like an aging building brought back to life – it's all about possibilities.

Doug and Susan Adams, of Buckingham County, are pleased to announce the engagement of their daughter, Kaitlyn Imogene Adams, to... read more