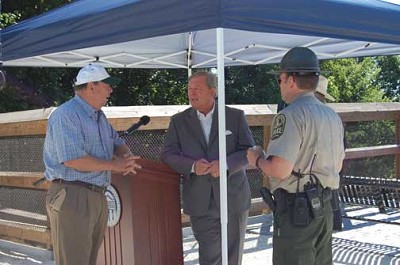 CUMBERLAND – The linchpin of High Bridge Trail State Park, the historic High Bridge, is officially open and dedicated. Local, state, and federal officials joined together with neighbors and other interested participants on Tuesday morning to celebrate the historic bridge as part of the 31-mile state park.

The linear state park runs through Nottoway, Cumberland, and Prince Edward counties and nears the border of Appomattox County. Opened for hiking, bicycling, and equestrian use in early April, High Bridge was the last segment of the park to open.

“We hope that you remember this day as a great day for the communities of Southside and the Commonwealth of Virginia as a whole,” said Eric Hougland, park manager, during his welcoming comments at the beginning of the grand opening ceremony.

“Welcome everyone to this great day here in Cumberland County to the dedication of the High Bridge Trail bridge,” said Joe Elton, state parks director, later. “…It is a great day.”

Elton's one great idea for the bridge was shared with those in attendance for the dedication.

“When this is done people will want to come out in the middle of this bridge and exchange their wedding vows because there cannot be a better backdrop,” he smiled. “And so to the first couple that gets out there I have a special wedding present for you!”

Tuesday was, indeed, a celebration of partnerships. Partnerships that have helped make the state park a reality and a success.

In the beginning, the rail-to-trail concept started out of a partnership.

Early on Prince Edward County took the lead in getting a Tobacco Commission grant and then added local money to get the planning process for the park started, according to Elton's comments.

“That was the first funding that went into this project and that was in February of 2004,” he said.

In July of 2004, the Commonwealth Transportation Board approved a $180,000 enhancement grant to begin the master planning process in further detail.

Other additional funding that came along the trail includes one million in capital improvement funding, $7.5 million in public building authority bonds sales, $743,000 in federal transportation enhancement funding, and then the federal government, through the American Recovery and Reinvestment Act, provided two million dollars to make High Bridge's renovations a reality, according to Elton.

In a press release issued, Governor Bob McDonnell stated, “Virginia's State Parks provide localities with an economic engine for tourism and recreation. With the completion of this project to refurbish the historic High Bridge, this state park will provide bikers and hikers with 31 uninterrupted miles for recreation.”

Elton named many of the communities and individuals who have worked, since the beginning vision, to make the park a collaborative project.

“Today is really a great celebration,” he said, before noting how his wife would be biking from High Bridge to Pamplin.

“She brought her bike with her and she immediately crossed and I will be picking her up in a couple of hours, I guess, after this is done, in Pamplin,” he said. “She is going to ride there.”

“It has the potential to be a tourist attraction and it provides another recreational outlet for folks who like to walk,” he said. “It's been no secret that this bridge, this spot, this 2,400-foot long bridge is the linchpin or the star of this park so that's why it's so exciting to be here today.”

As the railroad (Norfolk Southern Corporation) abandoned the line, “there was going to be a future,” said Elton.

“If the communities worked together that future could be a bright one and could be an economically viable one,” said Elton. “As it turned out…the communities realized that it should be a potentiality that ought to be capitalized on.”

The 31 miles of rail line was gifted to the Commonwealth after being abandoned, which also included the historic High Bridge.

Bruce Wingo, resident vice president, for Norfolk Southern Corporation, spoke about the original idea and said, “I think Watkins (Abbitt), and Sarah Puckett on behalf of Prince Edward, and Sherry Swinson on behalf of Cumberland are probably the first three people that tried to grab my arms and twist them and try to encourage us to do this. It is just so nice to see it coming to pass.”

Norfolk Southern donated approximately 500 acres to the state for the park.

Domenech noted how the attraction would serve all Virginians.

“High Bridge and High Bridge Trail will not only continue to serve this region but will also become an attraction that will serve Virginians from all across the Commonwealth,” he said before the ribbon cutting.

The role model for how to represent big hearted small towns and rural communities in the General Assembly was “raised pretty high,” by Watkins Abbitt Jr., said Elton when introducing the former Delegate.

Abbitt served in the House of Delegates for 26 years and played a major role in the High Bridge Trail State Park project.

During the dedication Elton told a story about Abbitt and the many phone calls between the two about the trail's progress.

“My wife can vouch for this story…if the phone rang in the year, pick one, 04, 05, 06, 07, or 08 before 6 a.m. the odds were that it was Watkins Abbitt calling to report on something and on a variety of occasions we would rendezvous in remote places like Elam, and Prospect, and Rice and we would capture photographic evidence…of scofflaws stealing our railroad ballasts not knowing if we would need it or not but we just figured we might need it and Watt Abbitt paid that kind of attention,” said Elton.

One time, Elton received a call and it went a little like this, “'I don't know what's going on here but it dudn't look good' and by God I got out there quick…He'd help me work with the landowners and the entrepreneurs that had sprung up along the trail once it was abandoned,” remembered Elton.

According to Abbitt, the park is going to help the economy in the area.

“This is a great day for me and I've looked forward to this,” said Abbitt. “I was hoping we were going to do it before I retired but at least we did it before I died.”

Abbitt noted the 80,000 visitors to the park last year and said, “We've already surpassed that and we haven't reached six months yet.”

“I'm hoping we are going to have 200,000 visitors before this year is out or somewhere in this vicinity. It's been a real honor and privilege to play a small part in this park.”

“Bob has played a great role in working with us,” said Elton, “in what has proved to be one of the more challenging things with the trail. The last mile in to Pamplin and the last mile and Mayor Morrissette can speak to this into Burkeville are undone business but it's business that we think we have a pathway forward and we think that we will include that and we will be into those great railroad depots-those great historic structures in both Pamplin and Burkeville in the future.”

The Governor's press release also mentions the last few miles and states, “…While opening High Bridge completes the 31 miles of park, efforts are ongoing to extend the trail into Burkeville on its eastern end and Pamplin in Appomattox County at its western end.”

Crossroads Community Services has been a “big supporter” and user of the High Bridge Trail State Park, according to Hougland and participants of the Crossroads Town House program walked from the River Road parking lot Tuesday morning to the dedication ceremony at the bridge with Executive Director Will Rogers.

“The group in attendance with the special t-shirts commemorating today's event,” said Hougland while recognizing the group. “They are special users to our park.”

Elton also recognized Crossroads and said, “They have become daily users and stewards of the trail.”

Envelopes with the commemorative High Bridge cancellation on them were sold at the grand opening ceremony and are available at the Farmville Post Office for the next 30 days upon request, according to Hougland.

After the grand opening, there was also an open house at the Heartland Regional Visitor Center, on the corner of Third and South Streets in Farmville, where visitors were given a first-hand look at the exhibits open to the public about High Bridge, which was made possible by many different partnerships. The visitor center is open seven days a week to the public.

Thomas C. Wright Jr., Virginia House of Delegates, noted how the opening of High Bridge involves more than just the restoration of the bridge.

He said, “High Bridge is the centerpiece of High Bridge Trail State Park and will provide local residents, as well as visitors from across the Commonwealth and the United States, recreational opportunities…Tourists will be drawn to High Bridge to enjoy a unique view not only of the landscape but also the skirmishes of the Civil War…”

“I'm thankful that Norfolk Southern was willing to work with us to get this moving forward,” said Senator Ruff, who also mentioned the Tobacco Commission money which jumpstarted the project.

“Where there's a will, there's a way,” said Ruff about the partnerships that were created.

Garrett noted how he was ready to get out on the bridge and said, “I'm so excited to have the opportunity to be in such a gorgeous part of the Commonwealth.

Although Virginia's Fifth District Congressman, Robert Hurt, was not able to make the dedication he sent remarks by way of Field Representative Paul D. Hoffman.

“The completion of the High Bridge Trail has been long-anticipated and is a model of state, localities, and private sector cooperation,” read Hoffman.

The bridge has spanned the Appomattox River since 1853. The original bridge was damaged during the fighting of the Civil War and was replaced by the current steel bridge in 1914. Pillars from the original bridge can still be seen paralleling the existing one.

The bridge towers 125 feet above the river and features three scenic overlooks. Horses must be dismounted and led across the bridge.

The 1914 bridge was at one time considered the “world's largest bridge.”

“Over the years, the bridge provided the community with more than just transportation,” said Domenech. “As you walk across High Bridge this structure completed in 1914 you can see the brick pillars off to the side and then you can see that seven of the pillars are actually missing. Well after World War II when building materials were in short supply the people of Farmville and surrounding communities salvaged that brick and used it on local projects as these communities grew…”

Virginia's Department of Conservation and Recreation Director David Johnson addressed the bridge during the dedication.

He first visited High Bridge Trail State Park in 2010 and could only get to the barricade, he said.

“They wouldn't let me on the bridge…,” he laughed.

The first weekend the bridge was open it saw approximately 3,000 visitors, he also noted.

“There were so many people on the trail that you couldn't see because of all the dust,” he said. “Now, that's pretty impressive and this is the official kick-off which means the word will get out even more so.”

Johnson noted the bridge's renovations and said, “This is a really good bridge…I will say that it is well built and it will serve the community and all those that use it very, very well. It's a very safe bridge. It's pretty high but it's safe.”

He also thanked the park staff at High Bridge Trail State Park-the folks seen on a daily basis by visitors and who work carrying out duties associated with the park.

Before the ribbon-cutting, the Friends of High Bridge Trail State Park group presented a token of appreciation to each of the speakers at Tuesday's dedication.

BUCKINGHAM – On Monday morning the Buckingham County School Board took a giant step in its search for a new... read more