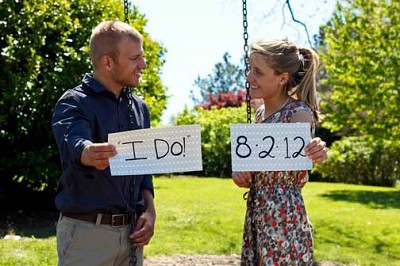 Doug and Susan Adams, of Buckingham County, are pleased to announce the engagement of their daughter, Kaitlyn Imogene Adams, to Robert David Penn Jr., son of Robert and Sue Penn, of Mount Vernon, IA.

Katie is a graduate of Buckingham County High School and is currently a junior Nursing student at Liberty University. She is also a cadet with the Army ROTC and will commission as an officer upon graduation. Katie is the granddaughter of Sarah Imogene Fail, of Buckingham, and the late Retired Special Forces Sgt. George L. Fail, and the late Mr. and Mrs. Jesse Dewitt Adams, of Thomasville, NC.

Rob is a graduate of Mount Vernon Community High School in Mount Vernon, IA. He is a 2012 graduate of Liberty University with a Bachelor of Arts in the field of Aviation. He is a 2nd Lieutenant in the Virginia Army National Guard. Rob is the grandson of John Weiser, of Beloit, WI.

An outdoor wedding is planned with the reception following at The Trivium in Lynchburg.