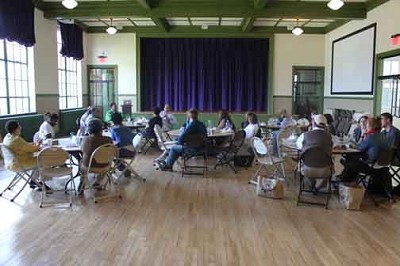 FARMVILLE – The Moton Museum's Fridays At Noon brown bag lunch series has a lot on the menu.

A nucleus of just over a dozen individuals attends the series, which began in the spring, bringing their lunch with them. They listen to a StoryCorps oral history interview with a local resident and then talk about what they heard and what the feel about it.

They hear and feel a great deal.

“One of the most powerful things for me,” said Justin Reid, the museum's associate director for museum operations, “is seeing…the conversations that are taking place because you wouldn't ordinarily expect some of the things that are happening.

“We had a teacher-she was a teacher in the public schools when the schools closed and then she ended up becoming a teacher at Prince Edward Academy-and she was sitting next to a student who had been locked out of Prince Edward schools,” Reid said. “And the two of them actually formed a friendship, and to hear them talk and share their stories is pretty extraordinary.”

Those two human beings are the tip of the understanding that is underway.

“If we can encourage that and bring more people to the table around this history,” Reid said of the Prince Edward's role in desegregation and the civil rights movement.

“I think for the folks who have been coming, one of the things I've heard is it's helped them in their healing process,” Reid said. “It's become a cathartic experience for them to be able to discuss the history and share their feelings and experiences, to have the opportunity to talk about what happened to them and how it affected them.”

Dorothy Holcomb is a museum board member and as a young girl massive resistance locked her out of Prince Edward County's public schools. Her StoryCorps oral history was featured on May 25.

“I see a point of healing in some people, forgiveness coming,” she said. “You see all different emotions that come out during the conversation. I've seen tears shed when people listen to themselves doing their interview. It's been a good experience.”

Every Friday from noon to 1 p.m. people bring a brown bag lunch from home, or pick up some take-out, and come to the Moton Museum. They listen to a program related to Prince Edward County's civil rights history and then they talk about it.

The first few months of the program have used oral histories recorded by the StoryCorps oral history project now housed in the Library of Congress.

Those will continue but the series will also begin including films, guest speakers and musical performances.

“We're going to try to change it up a little bit as we continue the series,” said Reid, who helps facilitate the conversation that follows the day's particular program.

“I really just come up with questions that I think would be interesting to help get the conversation going,” said Reid, who shares the dialogue facilitator duties with museum director Lacy Ward, and other staffers.

The feedback on the series puts a smile in Reid's voice.

“It's all been positive…They want it to be continued. I've gotten calls from as far away as Maryland asking about the (brown bag series) and saying they won't be able to come until the summertime…All the feedback that I've gotten has been very, very positive. Talking about the history, as you know, can be very emotional but I also think that's a good thing to get those feelings out. With a lot of folks, it can help.”

Reid believes the casual and friendly atmosphere helps encourage meaningful conversations and dialogue, as does sharing a meal together.

“I definitely think it does,” he answered. “We have our round tables, everybody's gathered around. It's much better than being in an auditorium set-up and having a speaker talk to you. It really is a conversation around tables.”

Ms. Holcomb said she gets the sense that when people are there at the museum, listing to “each others stories-and some who did not experience it-they glean a new appreciation for what happened. Just the little things that people experienced that was life-altering-you were about to go to a prom and you couldn't go, that year it was closed out. You were separated from your family at a young age, you went away (to school) and could only stay a few days because it didn't work out.

“Those kinds of things, that people hear the stories and they say, 'Oh, I really didn't know that that happened to her or that they experienced that,'” she said. “And I think that they glean a new appreciation for what people actually went through during those times.”

Reid has been at the museum for just over a month. The Farmville native grew up on the Cumberland side of town, graduating from Cumberland County schools and the College of William and Mary.

What is happening at the Moton Museum, and in the Farmville-Prince Edward community, is meaningful and important; Reid is certain of that. He is not alone.

“The more I learned about the history, the more I talked to my family about it, the more I realized that I wanted to be a part of the reconciliation that's going on,” he said. “And I know we still have a ways to go but I definitely think a lot of progress has been made and I think we're going to continue making progress.

Mickie Carrington, whose oral history interview was the focus of the very first Moton Brown Bag Lunch series, knows that process from the inside out.

“I have harbored a lot of anger and a lot of resentment and the museum has been a part of my healing,” said Ms. Carrington, who was locked out of school for four years.

Her healing began four years ago, during a school reunion, listing to a classmate's sermon on the Sunday of that reunion about turning anger over to God. She realized she had not done so.

“It touched me so much that before I left that service my healing began. And Moton Museum has continued to help me with that healing, being able to talk about things that happened, being able to hear other stories,” Ms. Carrington said.

“I can say that there was a time that I could not say Prince Edward Academy, or when it changed over to Fuqua, without being angry,” she said. “I can talk about Fuqua now and if I were invited over there for any reason I would go.”

(The Brown Bag lunch series will continue through 2012 from noon to 1 p.m. every Friday, thanks to the generosity of The Dominion Foundation)

PRINCE EDWARD – It's been a busy few years for Prince Edward's Economic Development office. “You're gonna see that the... read more