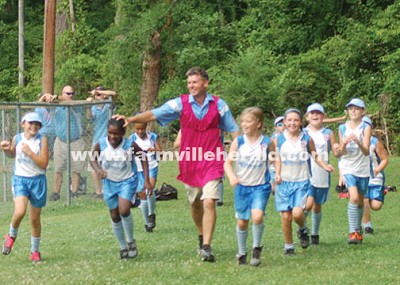 Prince Edward Farmville All-Stars Angels manager David Schmidt makes good on a promise he made to his team during the District I Softball Tournament over the weekend in Lawrenceville. The deal, was that he and his coaching staff would take turns running around the field in a dress if his team was victorious over South Hill on Sunday. The PE Farmville team won 6-4. The Angels were 2-2 in the eight-team, double-elimination tournament. In Friday's opening game, the FE Farmville All-Stars defeated Clarkesville 5-3. An 11-0 loss to Dinwiddie set up Sunday's game against South Hill. PEFYA's run in the tournament came to an end on Monday evening in a 10-2 loss to Blackstone.