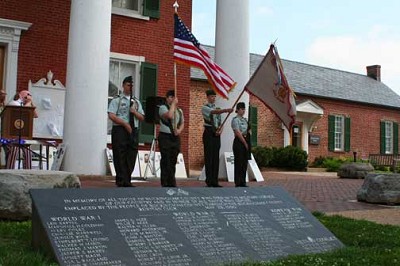 The Medal Of Honor

BUCKINGHAM – As they have for the last 22 years, the Buckingham County Ruritan Club hosted a Memorial Day Observance on the front lawn of Buckingham Courthouse.

On a day when many celebrate the unofficial beginning of summer, the Ruritan Club holds fast to its tradition of using the day to honor not only those Buckingham County citizens who died during their military service but also all who served in the Armed Forces.

Fittingly, the observance takes place at the county's war memorial, which rests on the courthouse green. The monument was a project initiated by the Ruritan Club and drew support from a community that wanted to honor its veterans.

Marie Sweeney, Commander of VFW Post, welcomed everyone and offered, “Thank you for coming out today to honor our veterans who have paid the ultimate price in service to their country.”

With precision and decorum, young cadets from Buckingham County High School's JROTC presented the Colors and the audience pledged its allegiance to the Flag.

As the crowd sang the National Anthem, a slight breeze unfurled the Stars and Stripes and seemed to weave a sense of patriotism through the crowd.

After recognizing and thanking those who are currently serving or who have served in the Armed Forces, Sweeney provided an overview of the Medal of Honor.

Sharing the definition of a veteran as perceived by an unknown author, Sweeney stated, “A veteran, whether active duty, National Guard or Reserves, retired or discharged from any of these, is someone who at one point in his or her life wrote a blank check made payable to the United States of America for an amount 'up to and including my life'.”

She added, “That is honor and there are way too many people who no longer understand it.”

Sweeney explained that the Medal of Honor is the highest award for valor in action against an enemy force that can be bestowed upon an individual serving in the Armed Forces of the United States of America.

“No amount of power, money, or influence can buy one's right of passage to this elite group,” stated Sweeney.

“What all recipients of the Medal of Honor have in common is the passionate love of country and the distinct honor of wearing the nation's highest award for military valor,” she added.

Continuing, Sweeney said, “The Medal of Honor does not belong to an individual. Recipients will tell you that they are holding it in trust for their fellow soldiers, sailors, airmen, marines, and coast guardsmen.”

According to Sweeney, the standards for receipt of the Medal of Honor have stiffened, particularly since WWI, to the point where it is nearly impossible to survive the action for which one might receive the award.

Sharing a quote attributed to President Abraham Lincoln, Sweeney stated, “Any nation that does not honor its heroes will not long endure.” She used the quote to segue into introducing the students from Buckingham County High School who would be making presentations honoring four of the 70 names engraved on the war memorial.

The monument lists Buckingham citizens who died in military service during WWI, WWII, the Korean War, and the Vietnam Conflict.

In 2003, students and staff at BCHS began a long-term commitment to research and compile biographies on those veterans.

This year's team members are all enrolled in the eleventh grade honors English class, instructed by Michelle Wright.

Ashley Raynor, speaking on behalf of her teammates Amanda Edwards, Elijah Ranson and Trevonte' Langhorne, shared that they concluded their soldier, listed as Archer Murphy, is William Archer Murphy.

According to the team's research, Murphy was born in 1910, in Cumberland and resided in the Curdsville area.

“He was a private first class who fought on the frontlines,” stated Raynor, noting that Murphy's duties involved mechanical work.

“On July 11, 1944, William Archer was incorrectly stationed and was immediately shot down by enemy fire. Upon his death, he received a Purple Heart Award,” shared Raynor.

She continued, “He left behind his wife Minnie Murphy and son James Leonard Murphy.” Raynor added, “And other than this, we have no more information on him.” She asked that anyone with additional information about Murphy contact a member of the team or Ms. Wright.

Obrieyah Cooke spoke on behalf of her team, which included Michael Eichinger, Nick Rhee, and Daniel Moss. Their research focused on Julian Harris Stanley, who was born in 1922 in the Toga Community and served during WWII. He was the recipient of the Air Medal and the Purple Heart.

“He served in the Army Air Corps,” she added, noting that as a member of the 504th Bombardier Group, Stanley was assigned to the Pacific Ocean Theatre.

According to the team's research, Stanley was killed in action on April 24, 1945; and was buried in the U. S. Memorial Cemetery in Honolulu, Hawaii. A memorial service was held in Appomattox several weeks later.

Damianos shared that Shumaker was born in 1896, in Buckingham County. The young farmer enlisted in the Army when he was 21.

“John's passion for the woods would lead him to the Canadian Forestry Corps for the duration of WWI. In this position, he aided the British by cutting and shipping them wood,” reported Damianos. “He died just one year after his enlistment of an unknown disease.”

Another WWI veteran, Thomas J. Martin was the focus of the last team. Laventa Woodson, speaking on behalf of his teammates Brandi Montaque, Jerrod Ayers, Ja'Quay Johnson, and Jovonta White, shared that Martin was in his early twenties when he entered WWI.

“He fought faithfully for his home and family,” shared Woodson.

According to the team's research, Martin, who was known as T.J., was assigned to the 80th Division and the 318th Infantry Regiment. “He enlisted under Colonel Daniel LeSueur,” stated Woodson. “They were both residents of Buckingham County.”

Noting that the 318th Infantry traveled across Europe, Woodson said that Martin died during a battle in France on October 4, 1918.

As he has done in the past, Ruritan Charles Lewis and his trusty harmonica aptly delivered the hymns for the respective branch of service in between each of the reports.

After Ruritans Robert Parson and Cliff Crews placed the ceremonial wreath at the monument, Sweeney offered, “I have one prayer for peace, one hope for harmony, and one dream for understanding.”

She concluded, “Thank you and may God bless America and all who serve and have served in her military.”

As the crowd dispersed, the wreath fashioned with flowing ribbons and red, white and blue flowers offered a stark contrast next to the cold dark stone engraved with the names of those who gave so much.

However, a ceremony, held on a day when schools were closed but drew the participation of dedicated cadets and their fellow students who had researched some of the lives behind those engraved names, offered a sense of reassurance that those who paid the ultimate price had not done so in vain.

FARMVILLE – A felon mistakenly released last month by Piedmont Regional Jail was picked up at the jail and driven... read more