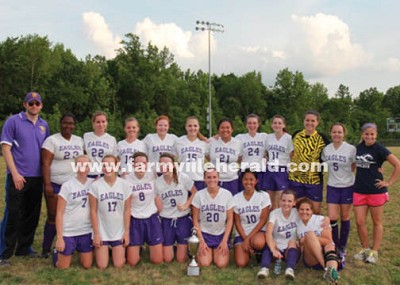 The Prince Edward County High School girls soccer team successfully defended its Southside District championship with a 6-0 victory over Park View last week. The Eagles were officially honored following their 5-0 victory over the Dragons on Wednesday afternoon at home.

Last year's reclassification left the Southside District with only two teams for the 2012 season. Prince Edward and Park View played a total of four times, with a fifth to be scheduled if needed. The Eagles completed a four-game sweep of the Dragons on Wednesday, which rendered next week's if necessary game unneeded. They will wait a week before hosting a Group AA, Region I Tournament quarterfinal match against an opponent still to be determined.