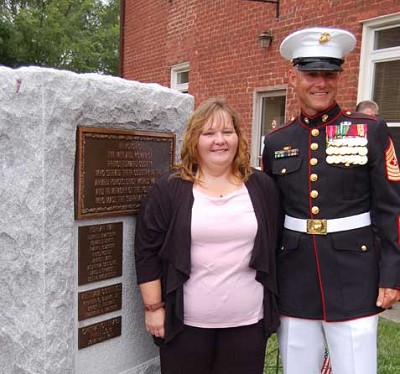 That's what the group gathered on the County's courthouse lawn did on an overcast Memorial Day morning.

“How we observe Memorial Day is a personal choice for each of us,” County Board of Supervisors Chairman William “Buckie” Fore offered in the brief ceremony. “I thank you for sharing your morning to help us honor the sons and daughters of Prince Edward County who are currently serving, who have served, and those of whom we cannot measure the value of what our nation has gained by their supreme sacrifice.”

Next to Fore on the semi-circle path stand two granite markers. One honors the soldiers who gave their lives in World War II. A second, placed in 2010, recognizes those who have died in conflicts since the war to end all wars.

On this Memorial Day, a crowd has gathered to honor the lone entrant from the officially just concluded Operation Iraqi Freedom.

With his mom and sister looking on, Sergeant Major Robert Breeden, whose lengthy list of military, humanitarian and peacekeeping missions around the world including Iraq, took them back to April 22, 2008, the day when 21-year-old Corporal Yale and 19-year-old Lance Corporal Jordan Haerter were serving in Ramadi, Iraq.

“Soon after assuming their post in the early morning, the two Marines spotted a large truck accelerating towards the gate. As the truck increased its speed and maneuvering through the serpentine barriers, they only knew one thing: this hostile nature was that of a suicide bomber. It was like staring at death itself and it only meant one thing,” Sergeant Major Robert Breeden said.

Inside the compound were approximately 50 Marines.

“The two Iraqi policemen that were also on the post with them ran,” Sergeant Major Robert Breeden said. “Several Iraqi policemen in the area ran. But Corporal Yale and Lance Corporal Haerter did not run. They stood their ground.”

Corporal Yale immediately engaged the truck with precise fire from his automatic weapon, Lance Corporal Haerter did the same with his rifle, Sergeant major Breeden continued. The bullets destroyed the vehicle and driver was killed as the vehicle stopped feet from their position.

Even though the driver was dead, the truck-estimated to be carrying 2,000 pounds of explosives-exploded.

“As the morning call to prayer echoed through the city, that thunderous explosion rocked the city of Ramadi, destroying the entire entry control point and severely damaging the joint security station. The blast ripped a crater five foot deep and about 20-foot wide across the street. Lance Corporal Haerter was dead, Corporal Yale was mortally wounded. Several Marines, numerous Iraqi police and two dozen civilians were also injured, but all others were saved due to their steadfast devotion to duty,” Sergeant Major Breeden reflected.

Sergeant Major Breeden, was at the Joint Security Station Sabatash that morning.

“That explosion shook the whole city…and I was still a good quarter mile away. My heart sank, not knowing at that time which station was hit, but knew it was bad,” he recounted.

“Six seconds, Sergeant Major Robert Breeden continued, offering a commensurate six-second pause, “was all it took to turn a quiet Iraqi street into a monument both horrific and heroic. Even by Marine standards, the heroism of these two young Marines was extraordinary.”

Both were posthumously awarded the Navy Cross, the Navy's second highest award.

Supervisors unveiled the additional plaque honoring the County's loss in Operation Iraqi Freedom, which Fore noted is “to insure that Corporal Yale's bravery and supreme sacrifice will never be forgotten.”

Fore also asked those in attendance to bow their heads for a moment of silence to honor the memory of Jonathan Yale and the 61 soldiers, sailors, airmen and marines whose names are cast on these memorials.

“Each was a son or daughter of Prince Edward County,” Fore said. “Each is an American hero.”

“I think that when we look for scripture for guidance as the reverend noted earlier, I…can only go so far as to think of the Great Commandment in the scripture that says that greater love hath no man than this, that he be willing to lay down his life for his friends,” Hurt said. “And I think that when you think about Memorial Day, at the end of the day, that's what it's all about-that's the principle at the root of that devotion to duty, devotion to peace, devotion to doing what it takes, having the courage, having the intelligence, having the guts to do things that most people would never want to do…and to see the things that no man should see, no woman should see at any time, but they're willing to do it for our sakes.”

BUCKINGHAM – Is an agricultural facility that could be used for cattle sales, rodeos, horse and livestock shows, farmer's markets,... read more