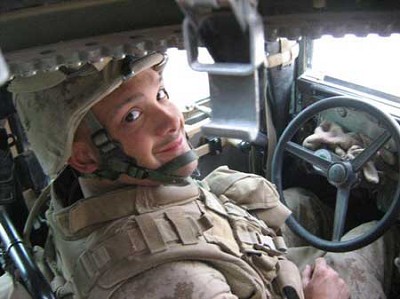 PRINCE EDWARD – “Everybody that knew him really, pretty much knew everything I wanted them to know…He was just an all out good person. You know, he was always caring and always looking out for everybody else…He was a true hero and that…will never go away. He is always gonna be a true hero…He was just a very upstanding person.” -Rebecca Yale

On Monday, Memorial Day, County officials will gather on the courthouse lawn in a public ceremony and add another name to the granite marker honoring Prince Edward County soldiers who have died in conflicts after World War II. That of Jonathan T. Yale.

Corporal Yale's tour in Iraq was winding down and he was scheduled to come home within days of April 22, 2008. What he, 21, and fellow Marine Lance Corporal Jordan C. Haerter, 19, of Sag Harbor, New York, did in the span of a few brief seconds saved lives. But it also, tragically, ended their own.

“When the truck refused to stop, Haerter and Yale stood in its path and opened fire. The truck rolled to a stop about 30 feet from the entry point and exploded, spreading destruction about 130 feet in all directions, demolishing a mosque and injuring 20 Iraqi civilians.”

The two were killed as the result of the explosion of the suicide vehicle and praised for saving the lives of fellow Marines and Iraqi police by preventing the vehicle from penetrating a police compound in Ramadi, the LA Times reported.

They have both been honored (posthumously) the Navy Cross, the Navy's second highest honor. A February 20 story of the ceremony posted on the Marines website notes, “Their heroic actions and courage saved the lives of over 50 Marines and Iraqi Policemen.”

“Of all the people I know, he's probably the one that I know that loved life the most,” his mom, Rebecca Yale, told The Herald. “…He enjoyed waking up every day…to see what the next thing was gonna be for him.”

He loved school, she reflected, loved the Marines. He liked helping anyone he came across. He loved the drama club.

In one play, Jonathan played multiple characters, switching costumes so fast he came out wearing a wig of a different character.

Rebecca laughs at the memory.

She would later note, “He loved being on the stage because he loved being right there…the attention right on him and…looking out and seeing all the people, because Jon was a real big 'people person'…It didn't matter what kind of mood you were in, if you were having a really bad day or whatever, he would not leave you until you were smiling and laughing.”

She remembers her dad planting fruit trees and two-year-old Jon out there wanting to help.

“I've actually got pictures of him at two years old where he's holding a tree up while his grandfather is throwing the dirt back in,” Rebecca said. “And then he's taking a cup and pouring water on the tree. Yeah he was always ready to help somebody.”

He was a cheerleader in school, involved in the DARE program, served in clubs, participated in robotics-very active.

He enjoyed the social part of school, a friend to everyone, and was pretty good in academics, too.

For Jonathan, however, it was the Marines.

“He loved the idea of the Marines, what they stood for,” Rebecca said. “…Everything about it, the uniform…He wanted to be one of the best.”

It wasn't long after graduation that he headed off to boot camp.

He loved it because it pushed him to the very limit.

“He felt accomplished because he could do that and he was ready to go again…It was something that not everybody can do,” Rebecca says.

Jonathan left for Iraq on Halloween of 2007, a week before his sister's 16th birthday.

“Then,” Rebecca begins, when asked how she felt about Jonathan going to Iraq then, “I was scared…My daughter said it all when she found out that he was leaving. And I don't know how to explain it. It's like…you almost get a feeling that something's gonna happen and…at first I didn't really have the feeling, but the last time I got to talk to him, I actually confirmed it for myself. I knew he wasn't coming home.”

She pauses, then adds, “I was proud of him for going and for what he stood for, but I really didn't want him to go. But there was nothing I could do about that.”

Rebecca saw Jonathan (via the Internet) about two weeks before he was killed. At first, she says, she didn't recognize him. He was very thin, she reflecting, estimating he'd lost 30-40 pounds in the time he was there.

They talked about his sister, his grandmother-he wanted to know what was going on at home. Jonathan had also ordered a bunch of paintball and skateboard stuff, which was also a big part of what they talked about. He also told his mom he'd sent some things and that there was something on the top he did not wish her to open that he wanted to show her so he could explain what it was.

“The night we found out he died, I went ahead and opened it and after talking with a couple of the guys I found that Jon had traded his hat, his Marine hat, for a headdress from over there and he wanted to show me how they actually wrap it.”

She still has them.

And will never get rid of them.

Everything in the trunk, Rebecca reflected, was covered in sand.

It was rare for Jonathan to admit he was scared of anything.

“…When I got to see him on the computer when he was over there two weeks before he died-it was like five minutes left of our communication time and…I looked right in his eyes, I could see it then. He said, 'Mommy,' he said, 'They're moving us.' I'm like, 'What do you mean they're moving you?' He said, 'They're moving us back to Ramadi.' And I'm like, 'Why are they moving you back to Ramadi-you're supposed to be getting ready to leave?' He said, 'Well, we've got to go down the trails.' I'm like, 'Great.' And he goes, 'Mommy, I don't want to go.' He said, 'I'm scared…' I said, 'What are you scared of, son?' He goes, 'Mommy, if I go, I'm not coming home.' So he knew and I knew.”

Rebecca added, “But the day he left, his sister already knew. Because when he boarded that bus…she watched the bus and she said, 'John's not coming home.'”

Still, she would later add, he died doing what he knew was the right thing.

There is a video of the event, which Rebecca has seen, that stops short of the explosion.

“It was at first,” she says, when asked about it being hard to watch. “But I know what he stood for and he was doing…what he thought was right. But, at the same time, those boys didn't even have a chance. Because the entire event happened in six seconds…You can see the truck as it's coming down the alleyway and you can see Jon and Jordan's guns out the window just firing.”

Had they not stopped the truck…

Rebecca later said, “I am not surprised because his biggest thing was he takes care of him and his and those behind the gate were his brothers and his sisters and that's…what they're supposed to do. They're supposed to take care of each other-supposed to watch each other's back.”

Jonathan has a bridge named for him in Nottoway County (which his mother says she crosses as much as she can).

“And every time we go across we holler out his name,” Rebecca says. “We do…every single time.”

Some days, she says, she'll go down there, pull off to the side of the road, look at the sign and think about him.

They were mother and son, yes, but were also best friends, too.

There's a building in Quantico named for Yale and an inductee room at Fort Lee.

Prince Edward's special ceremony starts at 9 a.m. on Memorial Day, Monday, May 28 on the County courthouse lawn. Another Memorial Day event is scheduled in Richmond later in the morning. She's not sure she'll make it there, but Rebecca plans to be here.

“This is…his hometown, you know,” she says. “He was born here in Farmville…raised in Meherrin…We've been waiting for this one quite awhile.”

Jonathan, the lone entrant from Operation Iraqi Freedom conflict (which has officially concluded), will join a list of others from the Prince Edward Community that have also given their lives in service to their country.

“Jon looked at things the way I did. We're all put here for a reason and once you have accomplished your reason, then you move on to something else,” Rebecca said.

FARMVILLE – A 45-year old Prince Edward man was shot and killed during “armed conflict with the police” on late... read more