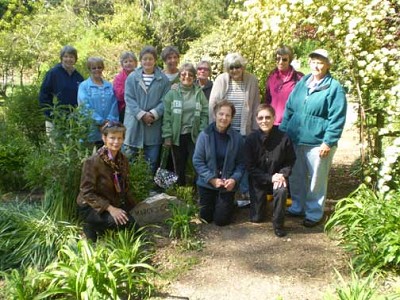 One of the early projects of the first class of Master Gardeners of Charlotte County was to establish a garden behind the public library in Charlotte Court House. The Hoys, owners of the house and grounds which became the second library building, had sheep in their back yard. This fertile land was the perfect place for a garden. Among the first class of certified Master Gardeners of Charlotte County in 1996 was Margaret “Margy” Watkins.

Margy, a Renaissance woman who loved art, classical music, gardening and parties, was an active member of the Master Gardeners of Charlotte County until the onset of ALS (Lou Gehrig's disease), which attacked her in her fiftieth year. Upon being diagnosed with ALS, Margy immediately set out to remodel her home to make it a handicap-friendly paradise. The many windows looked out on butterfly bushes, perennial and annual gardens and more bird feeders than one could count. Margy became a prisoner of physical paralysis, but ALS could not conquer her mind. She approached her altered life as a challenge. Throughout the thirteen years with ALS, Margy's friends became her gardeners and party-makers, meeting weekly at her home to garden, when in season, and always to party with her. Even after she became unable to speak, Margy communicated via computer, including her gardening wishes – no pink for Margy's garden!

As a memorial to this courageous gardener, the Master Gardeners of Charlotte County dedicated the library garden to Margy, naming it “Margy's Garden.” On April 12, the Master Gardeners met at the garden for the dedication ceremony. A field stone from the mill at Greenfield, carved with “Margy's Garden,” placed at a prominent spot in the garden, was the focus of the ceremony as Liz Walker and Ann Charlton lauded Margy, who continued to be a positive influence on her friends and fellow gardeners throughout her ordeal with ALS.

“Margy was so instrumental in establishing the library garden that it was appropriate that the garden should become Margy's Garden. This stone in the garden will help us to remember a life-long citizen of Charlotte County, a person whom we may strive to emulate, especially in times of misfortune or stress,” a spokesperson stated.