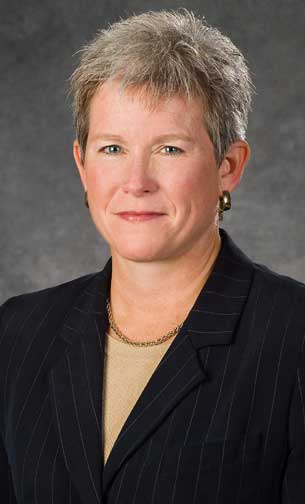 FARMVILLE – Longwood University is banking on a financial services executive to provide stable leadership as the university begins the search for a new president.

The university is also counting on familiarity.

Marge Connelly, former rector of Longwood's Board of Visitors, was named late Thursday to serve as interim president.

Ms. Connelly, who has served in top leadership positions for Barclaycard, Wachovia Securities, and Capitol One Financial Services, was appointed to the board of visitors in 2004, becoming rector in 2007.

“I am truly honored to have this opportunity,” she said. “I have come to know Longwood as a very special place that makes a big impact on its students and the community overall.”

Board of Visitors Rector, and 1992 Longwood graduate, Marianne Radcliff, described the university as “fortunate to have someone with Ms. Connelly's management experience, financial acumen, and knowledge of Longwood to guide the university through this transition. We are confident that she will keep the university moving in the right direction.”

In an email message to Longwood alumni, Ms. Radcliff told them “the board strongly feels that, with her long service on the board, as well as her management experience and financial acumen, Ms. Connelly is the right person for the job.”

Ms. Connelly served as global chief operating officer for Barclaycard from July 2009 to December of 2011. At Barclaycard, she was responsible for all operations and technology supporting the company's business activities throughout the United Kingdom, Europe and the United States.

Prior to her position at Barclaycard, she was chief operating officer for Wachovia Securities (now Wells Fargo Advisors), the third largest brokerage firm in the U.S. As COO from 2006-08, Ms. Connelly oversaw the firm's information technology and operations management and served on the Executive Committee.

She also worked for Capitol One Financial Services from 1994-2006, rising to executive vice-president. In that role, she managed much of the company's operations and technology, and worked to identify and cultivate relationships with business, government and community leaders.

Ms. Connelly earned her bachelor's degree in political science from the University of Delaware. She and her partner, Julie Christopher, live in Keswick and have two grown children.

FARMVILLE (AP) – A violent felon who was accidently freed from a regional jail in Farmville is the focus of... read more