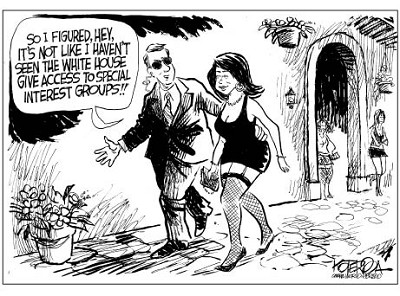 One doesn't have to be a cynic to wonder just what purpose was served by the public hearing held by the Prince Edward County Board of Supervisors on the advertised County and school budgets.

If the public hearing had been an election then More School Funding would have won in a landslide. The voices of the people overwhelmingly supported increased local funding for Prince Edward County's public schools, even if it meant raising taxes.

Nobody spoke against additional funding, but somehow Nobody won.

Nothing was added to the budget? Why hold public hearings?

Sometimes it appears, from the public's point of view, that the only reason governing bodies hold public hearings is because they are required to do so by law.

Yes, I know blame for budget cuts lies mainly with the General Assembly-and that shaping a County budget is a difficult job-but the people had just one governing body they could turn to for a solution, the Board of Supervisors. Furthermore, the people of Prince Edward County were specifically asked by the Board of Supervisors to come to them and, during a public hearing held for that explicit purpose, express their opinions and beliefs regarding the advertised budget. The public believes their comments at a public hearing will help shape public policy and the decision at hand.

The Board of Supervisors' decision in the face of unmistakable public expressions of support for additional funding for the County's public schools isn't going to make the public believe their voice actually matters.

Perhaps that is why more people vote during televised talent competitions than in their local elections.

Cynicism, one fears, was fertilized and watered by the Board's decision.

The process, itself, is flawed because the public hearing wasn't held until the Board of Supervisors had virtually completed the budget process, formulating and then advertising a formal budget.

The budget left the barn before the people got a chance to touch the plow.

Now, I don't want anybody talking about some “Silent Majority” and making the argument that, “Well, sure the public hearing was packed with people who spoke out for more funding for public schools, even if it meant a tax increase, and nobody spoke against more funding, but, hey the 'Silent Majority' was clearly opposed to more funding, especially if it meant raising taxes.”

Everybody in Prince Edward County was invited to come to the public hearing and speak about the budget. The voice of those who accepted the invitation spoke very clearly. Their meaning was easily understood. There was no ambiguity. No chance for any misunderstanding.

There is danger in giving too much credence to the voices of those who do not care enough to speak.

Look at elections. In the last two Prince Edward County Board of Supervisors elections the turnout of registered voters was 39 percent last November and 38 percent in November of 2009. The turnout of eligible voters was far worse than that.

If there truly is a Silent Majority and if it truly has power then how did any current member of the Board of Supervisors prevail when at least 61 to 62 percent of the registered voters in the County were apparently saying No by not voting?

Because elections are determined by the voices of those who care enough to participate. So every one of those election results for the Board of Supervisors was totally legitimate. There was no 'Silent Majority' opposing those on the ballot.

When the public, instead, feels its voice is completely ineffectual there can be two main reactions-apathy or energy.

Some people turn away from participating in their local government and retreat deeper into their own lives, while others decide to run in the next election.

A Day In The Life

My daughter, Kate, has lent me Keith Richards' autobiography, Life, on compact disc, narrated by Johnny Depp, and the daily... read more