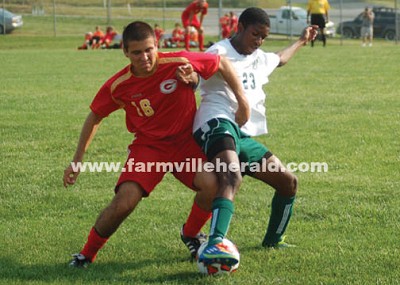 The Buckingham County High School soccer team came up just a little short in its bid for its second-consecutive James River District championship in a 4-1 loss to Goochland on Thursday afternoon at BCHS.

The Knights, who had lost their final two regular-season games, but defeated Central of Lunenburg 6-0 on Monday in the James River District Tournament quarterfinals to advance to Wednesday's semifinal match at home against the Amelia/Randolph-Henry at 5 p.m.

“They're extremely quick on defense,” BCHS head coach Chuck Meek about the Bulldogs, whose only JRD blemish was a 3-3 tie with Buckingham. “Their passing is superb, and they beat us to the ball on several occasions. We helped out by playing flat on our part.”

Goochland controlled the momentum early on, and went ahead 1-0 on a goal in the seventh minute.

Buckingham drew even in the 13th minute on a direct penalty kick by Bobby Dandridge, and had a good shot to take the lead in the 20th minute.

Senior forward Mike Amos took possession of the ball on the Buckingham end of the field (about where the 30 yard line would be) and held off multiple challenges as he moved down the field. He found Dandridge who was open, but Dandridge's shot was saved by the Goochland goalie.

Four minutes later, Goochland scored to take a 2-1 lead, and added two more goals (one in the 28th minute, and another in the 39th minute) to take a 4-1 lead at intermission.

The Knights managed to play their guests even in the second half, as Goochland looked to protect its lead. Buckingham had a couple more chances, but was unable to put the ball in the net.

“Goochland deserves to be the champions, and they showed it tonight. We played them totally even in the second half after we made some changes, but they played smart. Once a team like that gets up, they generally don't blow the lead on their own.”

The Buckingham County High School softball team saw its season come to an end with a 6-0 loss to Central... read more