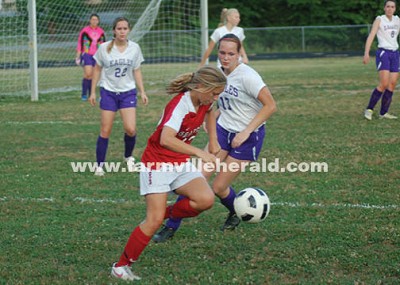 FARMVILLE – As expected, the Prince Edward County High School girls soccer team's stay in the Region I Tournament was a brief one. The Eagles lost 8-0 in 62 minutes to Bay Rivers District No. 2 seed Grafton on Tuesday night at the PECHS Soccer Field.

Looking at when those most of those eight goals were scored, the Eagles can feel better about the match than what can be inferred by just reading the final tally.

Despite being down three starters, and with school already on summer vacation, the Eagles trailed the heavily-favored Clippers 3-0 at intermission and by the same score at the 50 minute mark, when fullback Jenna Bisaillon went down with an ankle injury.

It was the fatal move in Prince Edward's personal game of Jenga. Like a house of cards, an already shaky foundation toppled. It didn't take long for Grafton to score its fourth goal. And then one additional goal every two minutes, until the match was ended in the 62nd minute per Virginia High School League rules.

“We were already short coming into the game with a lot of people that couldn't play for one reason or another,” said PECHS head coach Jason Crabtree. “Two of them were on their way to Germany for a student exchange program, and another was injured. When Jenna went down, we couldn't hold them off any longer.”

The absences mostly affected the Eagles' defense, so Crabtree pulled several forwards, including Southside District Player of the Year, Lauren Keup, back to play along the back line. Keup played the role of sweeper.

By packing players in front of the goal, Prince Edward was able to keep the game respectable well into the second half.

Of course, that strategy severely limited the Eagles on offense, as only senior forward Katrina Lowe played in her normal position.

“We had to do that to give us a chance,” said Crabtree whose teams usually play a more wide-open game, “and hope that we could get the ball to Katrina. That's very, very hard against a team like this. To score you've got to get a perfect pass, and then you've got to get off a perfect shot.”

The way the game unfolded does leave a few “what ifs” on the table.

“That said, every one of these girls did an excellent job, given the circumstances.”

The result was better than in 2011, when the Eagles were shut out at home in a game that got out of hand much earlier.

“I guess you can say that we're able to feel better about this game than we did last year's.”

The Eagles, who were hit pretty hard by graduation in 2011, will lose seven more seniors who received their diplomas in May. With numbers approaching the level of not being able to field a team, Crabtree is hoping for a rebuilding year.

With just two teams fielding girls soccer teams in the Southside District, the Eagles would already be assured of a playoff spot.

“Best case is that we will have to go through a rebuilding year, at least I hope so.”

Citing that the program has always been competitive on the district level, Crabtree would like to see the program continue to build into one that can make deep runs once it gets into the playoffs.

“It's a progression. I feel this program is a lot better off than it was four years ago. We've had a lot of help from Longwood and Hampden-Sydney [former coach]Tyler Brastow helped to set it up for this run. McKenzie King has helped to get us to improve even more. The first match we played against Park View, we won 4-2. She worked with everyone, and the next time out, we win 5-0, and then 6-0 and 6-0.”

Provided the numbers are able to support fielding a team next spring, the Eagles will enter a rebuilding phase, but with a little more tradition than the last time.

“This has been a great group that has worked together really well, and hopefully we can continue to build on what they have done.

“After a tough day at school, they looked forward to getting out here and running. They enjoyed being part of the team. This is a group that has truly played for the love of the game.”