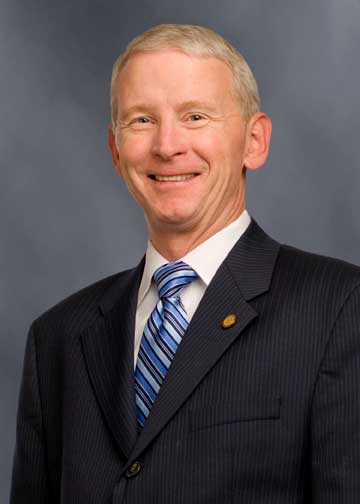 Seven months after his inauguration and three days after graduation, Longwood University announced Tuesday that Finnegan has submitted his resignation to the university's Board of Visitors, effective June 30.

Finnegan made his first public appearance at commencement on Saturday after being on leave due to health reasons for several weeks.

“I said in my inauguration speech that I will be a Lancer forever, and that statement is as true today as it was then,” Finnegan said in a statement issued by Longwood. “Joan (his wife) and I will always be grateful that we had the privilege of becoming part of the Longwood family. I am proud of the strides the university has made over the last two years.”

Dr. Ken Perkins, interim vice-president for academic affairs, has been serving as acting president in President Finnegan's absence and will continue in that role. LU announced that the Board of Visitors will meet soon to appoint an interim president and discuss the ways and means for selecting Finnegan's successor.

A retired Army Brigadier General who was chief academic officer at West Point, Finnegan came to Longwood in July of 2010.

In the statement released by Longwood, Finnegan said that stepping down as the university's president after just two years in office was a difficult but necessary decision.

Board of Visitors Rector, Marianne Radcliff, praised Finnegan for accomplishing a great deal in a short period of time and said he would be greatly missed.

“It is with great sadness that the Board of Visitors accepted President Finnegan's resignation,” she said, in a statement released by Longwood. “From Pat's first days as president, his joy at being a Lancer and his vision for Longwood inspired excitement throughout the campus, from freshman students to long-tenured faculty members.”

In his last words spoken to students, Finnegan told graduates on Saturday that there is greatness in living our daily lives to the best of our ability.

“You may not lead an army into battle, as did Joan of Arc, you may not be founder and CEO of a Fortune 500 company or serve as president of the United States, but you absolutely can be every bit as great as they are,” he assured them.

“Be great in your own city, your own neighborhood, and, most important, your own family,” Longwood's 25th president said. “Be a person who uses fairness and honor to lead and there is no limit to what you can achieve.”

Chief among Finnegan's achievements at Longwood are the university's acceptance, after long years of effort, into the Big South Conference, creation of an academic strategic plan, focusing on making faculty and staff salaries more competitive, and gaining more international students.

Nothing was more obvious, however, than Finnegan's rapport with students, through participation in their class paint war games and so many other activities, and doing so with genuine relish.

“You have certainly not faded away,” Larissa Smith Fergeson said during October's inauguration, conjuring Gen. Douglas MacArthur's farewell speech as she gave her official greetings from the faculty. “You have energized our community.”

In closing his inaugural address that October afternoon, Finnegan vowed, “I will do the very best I can for Longwood because as of today, not only you, but I, am a Lancer forever.”

Despite Tuesday's announcement, those feelings haven't changed within the hearts of the entire Lancer family.

The community's reaction to Finnegan's resignation was summed up Tuesday by a local man who said Finnegan would leave a lasting mark on Longwood and Farmville that would far exceed his time on campus.

“Ripples are measured by the impact, not how long something remains on the surface of the water,” he said. “President Finnegan's two years at Longwood are now part of the university's DNA and will remain a vital part of the institution, and its place here, forever.”

PRINCE EDWARD – May is not the scheduled month for county supervisors to make school board appointments. The end of... read more