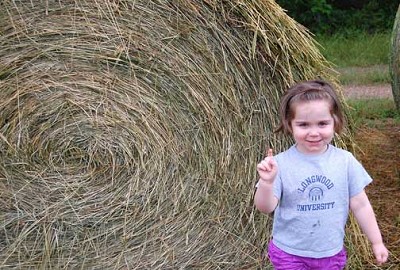 Thanks to this season's first hay cutting my child just might learn how to count before she goes to school!

Nope, this isn't some kind of funny joke. It's true.

Sometimes she can be as stubborn as a mule and, lately, she wouldn't take the time (no matter how often I tried) to learn how to count and I've been running out of ways to bribe her. So, in true-and-tired momma fashion, I gave up and just started hoping that one-day the need for her to count would arise and she'd stop counting by saying, “two four, six, eight, 12.”

No, that's not funny either but, again, it's the truth.

That's the way she's counted everything since she could just about talk. And sometimes she'd even jump all the way to 96 while stringing her numbers together.

But don't waste time worrying about her counting problems…she had a plan up her sleeve all along. Evidently.

“Momma! Let's count all these hay bales,” she said out of nowhere this week while we were driving to town one morning from home.

Thank goodness for living in the country where we pass A LOT of fields in our travels.

We even have one field just past the front yard and one just behind our back yard.

So, as you can see, we've got endless round bales to count and, oh boy, have we been counting.

We usually only get to 10 while driving past a field in the car.

For one, I run out of fingers to use while driving and two, I'm driving too fast to count the entire field, which I think is perfectly okay with the little one because, I mean, she only has 10 fingers.

Ten bales are all we really need.

“There were 10 hay bales in that field, ma!” she yelled out after passing a really large field that had way too many round bales for us to count.

One evening this week we even sat on the front porch just so we could count the bales of hay that were being loaded on the trailer out of the field.

Although I wasn't paying attention to how many were being loaded the other half of mine had it down.

If anyone needs to know how many bales their field yielded between where we live and Farmville-just ask the little one. She'll tell you, for sure, that there are 10 bales in your field.

You might actually have 64 or 32 but she'll still side with the number 10.

“No I only see 10 in that field,” she told her dad after hearing there were more.

I then had to catch him up to speed on how we're only counting to 10 right now.

I know we all appreciate our farmers and the fruits of their labor but sometimes we, this momma especially, appreciates them for a completely different reason.

Instead of counting sheep this family counts hay bales.

Hey, maybe I'll even try it out tonight and see if it helps out with bedtime. There's definitely a shortage of sleeping hours in this house.

So today I'm thankful for all the fields full of round bales for us to count and we'll definitely be on the look-out for the next cutting.

We'll probably have counting to 10 down pat by then and be ready to move on to 20!

On Sunday, May 20, a celebration was held in honor of Marshall and Dorothy Tucker given by their daughters, Deborah... read more