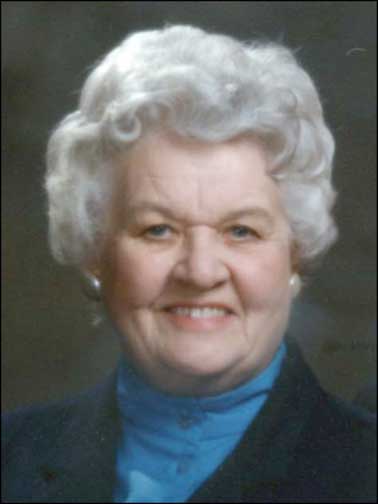 APRIL 12 – Nancy Jenetta Banton, 99, passed away peacefully at The Woodlands on Tuesday, April 10, 2012. Born on October 5, 1912 to Charles and Cara Robinett in Coeburn, she inherited a love for the beautiful Virginia Mountains and the peaceful grace of rural family living. After the retirement of her husband in 1972, they moved from Chesapeake to the Farmville area where they developed many friends, became active in the Cumberland Centenary United Methodist Church, and enjoyed giving assistance to friends and neighbors.

During World War II, she worked as a seamstress in the Lynchburg Hosiery Mill where socks and footwear were made for the troops.

She was a graduate of E.C. Glass High School in Lynchburg and concentrated her studies in business subjects. During her teenage years, she became an accomplished musician with the mandolin and organ. As a member of the orchestra for the Lynchburg Odd Fellows Home for Children, numerous concert tours were made throughout Virginia and North Carolina.

Of her many talents, she was best known for her ability to easily prepare delicious country style meals and having a wonderful memory for recipes. She learned from her childhood the enjoyment of a good country meal and would never let a visitor to her home leave without first dining with her family.

Those who knew her well have stated that during her lifetime, she never uttered a negative word about anyone. Her exceptional grace, beautiful smile, and customary greeting of “Hi sugar!” will be missed. She was a wonderful gift from God.

The family suggests a contribution be made to a local rescue squad or a volunteer fire department.

The family will receive friends at the Shorter Funeral Home on Monday, April 16 from 6 to 7:30 p.m.