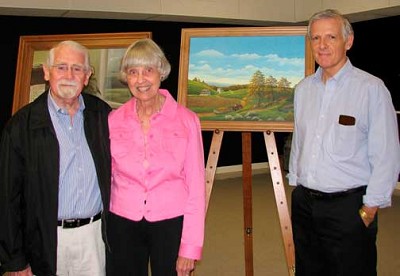 From writing in the schools to art in restaurants, contributions to the cultural life of our region will be recognized later this month by the Longwood Center for the Visual Arts. The LCVA will present the Community Achievement in the Arts awards to artist Eldridge Bagley (individual), the Riverside Cafe (business), and the Farmville Woman's Club (organization). In addition, a special award will be presented to Richmonders William and Ann Oppenhimer, founders of the Folk Art Society of America. Furthermore, the LCVA will recognize Angela Jackson as volunteer of the year and the men of Theta Chi Fraternity, Iota Lambda Chapter, as student volunteers of the year. An award ceremony and reception, free to all, will be held on Monday, April 30 from 5 p.m. to 7 p.m. in the lower level of the LCVA.

The individual recipient is Eldridge Bagley, a native of Victoria in Lunenburg County and an accomplished contemporary folk artist. His works have been featured at the Glave Kocen Gallery, the Valentine Museum, and Meadow Farm Museum in Richmond; the Maier Museum in Lynchburg; the Longwood Center for the Visual Arts and j fergeson gallery in Farmville; as well as galleries and museums in Georgia, North Carolina, and South Carolina.

The business award will be presented to the Riverside Cafe. Located in downtown Farmville, the restaurant is owned and operated by Jean and Parker Wheeler and family. On an ongoing basis, the restaurant exhibits works by local artists through a partnership with Central Virginia Arts. Currently, works by Judi Crespo and Cynthia Roethel are on display through May 26.

The Farmville Woman's Club has been selected as the organization of the year for its long-term support of the arts in our area. Over the years, the Woman's Club has supported the Farmville-Prince Edward Community Library, organized an annual creative writing contest for students, and furthered literacy by providing books for the Piedmont Regional Jail.

In addition, William and Ann Oppenhimer of Richmond will also receive a special award. The Oppenhimers began collecting in 1983 and are national advocates for the appreciation of folk art and the founders of the Folk Art Society of America. This past fall and winter, the LCVA showed the highlights from their collection in an exhibition titled Three-Ring Circus. The exhibition drew visitors from across the country and was featured in the Richmond Times-Dispatch.

Every year, the LCVA also honors two individuals who volunteer their time and talents to the art center. This year's individual volunteer of the year is Angela Jackson. Jackson is the Director of Residential and Commuter Life at Longwood University and a member of the LCVA's Advisory Board. Director Kathy Johnson Bowles says, “Angela has helped the LCVA in practical ways, such as serving on committees, but she has also help in intangible ways, such as using her infectious cheer to promote the arts in general and the LCVA in particular.” In addition, while one individual is normally chosen as recipient of the student volunteer award, this year the LCVA is honoring an entire group. The young men of the Theta Chi Fraternity, Iota Lambda Chapter, chose the LCVA as their philanthropic organization to support for the 2011-2012 school year. The Longwood fraternity had 12 members donate nearly 90 hours of time to the art center. “The members of Theta Chi proved to have a strong work ethic and brought a sense of fun to every workshop and event they attended,” said Hilary Symes, Assistant Educator at the LCVA.

The Community Achievement in the Arts awards recognize individuals and groups that have made significant and selfless contributions to the development of the visual, performing, or literary arts in the area (including Amelia, Appomattox, Buckingham, Charlotte, Cumberland, Lunenburg, Nottoway, and Prince Edward counties). After soliciting nominations from the public, the LCVA's Marketing Committee selects the winners.

If I've learned one thing from three decades of living in the country it's this: those who don't believe in... read more