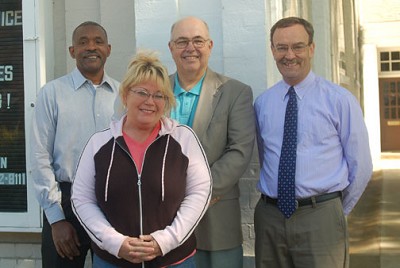 What do you have when you combine the resources of the Farmville Ministerial Association, the Salvation Army, HOPE Community Services and the newly formed Local Rescue Mission for the Homeless? The answer is a new approach to an age-old problem – homelessness.

“There are homeless here,” stated the Rev. Dr. Kitty Smith, executive director of HOPE Community Services and pastor of Oak Grove Baptist Church. “It's a problem that in this area we're not as familiar with because we don't see people pushing a cart or people with big bags on their backs, but homelessness is a real problem here. There are people living in abandoned buses or abandoned outbuildings. They just don't have a place to stay.”

Helping to address that problem in this area is HOPE, a non-profit, community action agency that offers vital services to seniors and low-income individuals. HOPE serves as a lifeline for those on the verge of losing their homes. HOPE is also an integral part of the network put in place by the Local Rescue Mission for the Homeless, an effort initiated by Johnna Schular.

“I've always had a heart for the homeless,” stated Schular. “Growing up in Tidewater, I remember going to a rescue mission with my mother.”

A few years ago Schular was talking about the homeless situation to Debora Warner who put her in touch with Larry Lehman of the Salvation Army. Schular discovered that the local unit of the Salvation Army, which has an office in Farmville United Methodist Church is charged with assisting those who find themselves in emergency situations.

“The Salvation Army primarily assists people in unexpected emergencies,” Lehman noted. “We also take care of people if they find themselves without a place to sleep. Most of the time we assist them in finding a temporary shelter. Frequently we refer women to Madeline's House. Many times it's late at night, so we put them up in a motel until we can get them to a shelter.”

Lehman is well acquainted with emergency situations. A 32-year veteran of the Virginia State Police, he is currently serving as associate pastor for Antioch and Payne Memorial United Methodist Churches in Cumberland County.

“There's not a week that goes by that I don't talk to several people about the possibility of needing a shelter,” the chairman of the Prince Edward Salvation Army unit noted. “If someone comes in and can't pay their electric bill sometimes it becomes apparent they may not be able to continue to live where they're living.”

Lehman added that HOPE Community Services has a staff trained to assist people who are in danger of losing their home.

“Our program is about the prevention of homelessness,” the HOPE director said. “Sometimes people will panic and just leave when they are evicted. We may be able to work with the landlord to catch up rent payments. We've even had conferences with mortgage companies to assist with mortgage payments.”

Considering the resources already in place to assist the homeless, Johnna Schular decided it was time to organize a Local Rescue Mission in Farmville to oversee these resources.

“We began to meet and discuss our plans and goals,” she said.

It was one of those meetings that brought Farmville Presbyterian Church into the program.

“When the Local Rescue Mission folks came to the Farmville Ministerial Association with their program it just clicked with me,” stated the Rev. Dr. Tom Robinson, pastor of Farmville Presbyterian.

Rev. Robinson invited the Local Rescue Mission to present their plan to the church session.

“I thought there might be some concerns,” Rev. Robinson said. “But in our session retreat in January the homeless shelter got more votes than anything else. For the elders of our church that was the number one project we wanted to work on for this year.”

“I told the Local Mission group – if you want a church to be the guinea pig, we'll be it,” the Farmville Presbyterian pastor noted.

“We had someone come to our office who said, 'I've just lost my place of residence – I've got to find some help.' We sent him to Larry Lehman at the Salvation Army which is what we do,” Rev. Robinson related. “Two nights later, our first night of having the homeless in our church, there he was. He was here a couple of nights.”

Each of the participating churches was asked to cover a two-week period. The LRM provided one volunteer to stay along with one volunteer from the church “on duty.”

“That first man that stayed talked about the care he felt and the discussions he had with the people who stayed at the church with him,” Lehman commented. “That seemed to mean more to him than having a safe place to sleep. It meant the world to him that he had someone to talk to, someone who showed an interest in him as a human being.”

“I believe the folks who stayed at the church those nights got more out of it than the homeless man,” Rev. Robinson added. “Our church members felt enriched by spending time with this man and talking with him. Several of them said, 'I don't know who ministered to whom.' From past experience that's almost always the case.”

Pastor Robinson noted that putting a face on the homeless brings a whole new level of understanding.

“It's easy to say that the homeless are deadbeats and can't do anything for themselves,” he observed. “When they take on flesh and blood and you get to meet them, you get to know that this is not somebody who's lazy – this is somebody who's had a stretch of bad luck.”

BUCKINGHAM – On Saturday, April 28, beginning at 3 p.m. until, Buckingham Baptist Church is hosting a kick-off event at... read more