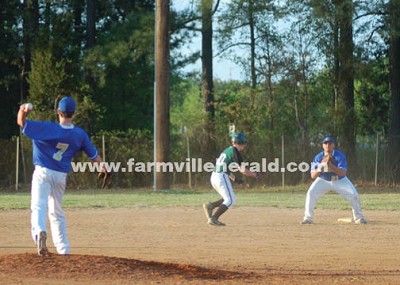 AMELIA C.H. – That the Cumberland High School baseball team played a close contest with Amelia County High School for five innings of what turned into an 11-0 six-inning loss Tuesday night, may have been a consolation in the past. It's no longer.

The Dukes trailed just 2-0 going into the bottom of the fifth, and 3-0 into Amelia's portion of the sixth, before the Raiders exploded for eight runs to bring an early end to what, for the most part, was a pretty tight ball game.

“It's tough to be in a game like that, trailing 2-0 and then 3-0, and lose it like that,” said CHS head coach Duane Partusch. “We made critical mistakes at critical times, both defensively and offensively.”

The Dukes stayed in the game due in part to a strong outing by sophomore pitcher Cody Tyson. The left-hander tossed five strong innings, before tiring in the sixth with CHS trailing 6-0.

“When Cody is on the mound, we're in games,” said Partusch. “For some reason, he hasn't been able to get relief.”

In order to win, a team needs to score at least once. Cumberland (1-6-1) was able to get runners on base and in scoring position, but the Dukes were unable to sustain anything offensively.

“We had runners,” said Partusch. “We had our chances, but we would do something, or they would make a good play to keep us from scoring.”

Trailing 2-0 following an Amelia home run by Josh Taskar, the Dukes appeared to be in position to answer. Junior Bryant Winbush led off the top of the third with a four-pitch walk, which was followed by a Loren Glover single, but Amelia was able to get out of the jam with a double play and a strikeout.

Joseph Mahoney led off the top of the fourth with a double, and was moved over to third on a sacrifice by Justus Dowdy, but the Dukes were unable to generate a solid hit to get him home.

Down 3-0 in the top of the fifth, Dylan Samuels singled to lead off the inning, but couldn't get any further than second base.

“If we get one of those guys in, or if we're able to somehow tie it up, you never know what that may have changed. We have to put it together for seven innings. Amelia is no slouch team. They're one of the favorites this year.

“Yeah, we competed, but the kids are tired of just competing. That may have been a gold star last year, but they're ready to start winning.”

Cumberland was scheduled to travel to Nottoway on Thursday afternoon. That will complete the Dukes' first trip through the double round-robin JRD schedule. Cumberland will travel to Randolph-Henry on Tuesday.

“Look,” said Partusch as he pointed to his team getting ready to board the bus. “You can see that their heart's in it. They're down. They're not joking around or smiling. It will be the same way on the bus. It would be different if they were laughing and cutting up, but they're not, and they won't be until we get back to the school.

“It still matters to them, which is a positive. Maybe we can get the wheels turning our second time through the district.”

FARMVILLE – With most schools in the area on Spring Break this week, the sports calendar is light for those... read more