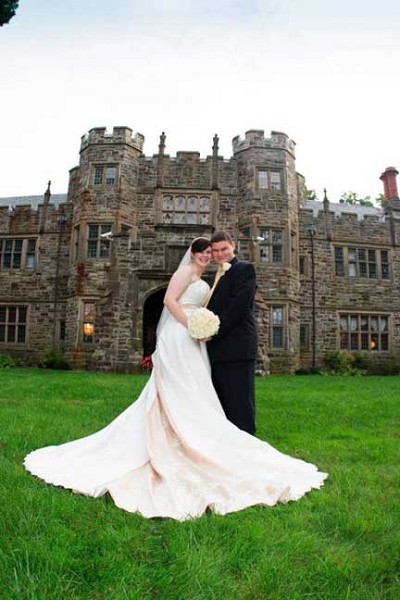 Rebecca Lauren Highland, of Lost Creek, WV, daughter of Robert and Ruth (Bush) Highland, and William Ralph Bailey IV, of Farmville, son of William and Melissa (Huddleston) Bailey III, were married in a double ring ceremony on September 25 at the Castle of Maryvale, Brooklandville, MD

The bride, escorted to the alter by her father and given in marriage by both her parents, wore a full length Alfred Angelo gown.

The matron of honor was Lucy (Orr) Bailey, grandmother of the groom, and was escorted by her stepson and best man, William Ralph Bailey III. The honorary best man was the late William R. Bailey Jr. Lucy (Orr) Bailey gave a special reading during the wedding.

All the men in the wedding party, including the groom, wore tuxes of blue and gold, the colors of WVU where both bride and groom went to college. The groomsman was Brandon Bergeron, cousin of the groom, and usher was Christopher Highland, brother of the bride.

The wedding reception, held at the castle, included a social hour followed by a seated dinner and dancing following the dinner. Music was provided by Karl Hunt, and the food was provided by Sherri Levin and staff.

Following a wedding trip to Las Vegas, NV, the couple reside in Lynchburg.