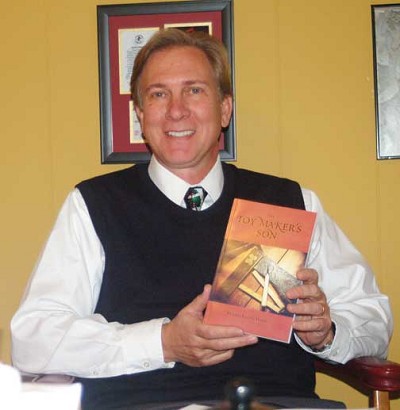 Francis Wood gives the magic of the old-fashioned world of toy making a modern day setting in his latest book, The Toymaker's Son.

“There's a lot of real life elements to this story,” Wood related. “It's a story of a middle-aged man who has lost his career due to downsizing.”

As the story begins George Whitley has returned to the home of his parents, John and Anna Whitley, to decide what to do with his life after losing his job. George's father, John, is the modern version of a toymaker. He makes toys and puzzles to sell at craft shows at year's end.

George finds that his home is much as he left it 20 years ago with one exception – his parents. They have aged, and his father has been diagnosed with congestive heart failure.

Despite health issues, the old toymaker continues to whistle as George enters his workshop, a magical place that Santa would no doubt recognize.

There were toy soldiers, wooden cars and trucks, doll houses, bird houses, crates filled with colorful wooden spinning tops, sailboats, cup and ball sets and dominos. One end of a table held a stack of jigsaw puzzles. There was an assortment of whirly tinkers and a dozen or more sleds with metal runners, rocking horses and pull wagons.

George walked over to a row of sleds hanging on the shop wall.

“Remember the clipper, Pop?” he asked as if lost in thought.

John let his fingers run over the smooth, varnished boards on one of the sleds. A faint smile formed on his lips as he recalled his son's sled. “It was a Western Clipper. A fifties model, thirty-nine inches long. I found it in a ditch on the side of a road one evening on the way home from a Christmas bazaar we were doing. Anna said it was too broken and bent to save, but I brought it home anyway.”

“That sled really existed,” the author recalled. “My dad pulled me around outside on that sled and told me how to turn. I never forgot those things.”

George didn't realize it when he returned to his parents' home, but he was about to be re-educated on the values of life.

Cleaning up the kitchen that night George quizzed his mother about his father's habit of whistling.

George asked as he began drying the plates, “I mean, does he really feel like whistling?”

Anna looked intently at the pot she was scrubbing. “He's always whistled like that. Even when I first knew him. It's genuine. I think he does it because he truly is happy in his heart.”

“I never whistle,” George took the pot his mother gave him and began drying it slowly.

“Look, George,” his mother said in a serious tone. “Happiness hasn't eluded you all these years. You've eluded it. Neither your job nor the money you've made from it has given you what you desire. Maybe this is the time in your life when you take a good look around. The things that can make you feel like whistling might be closer than you think.”

“Doors open and close throughout your life and you have to determine which ones to take and which ones not to step through,” Wood said. “In this case one door closes and another one opens, and George is driven back by that emotional compass that we all have.”

On the other side of George's open door is another piece of his past – April Gates, a childhood friend's little sister. Now a neighbor of George's parents, April is a widow raising her young son who has spinabifida.

“The love story – it's one of those things that can happen when you least expect it,” the author noted.

While the real world has rules and limits, Wood believes that the world of fiction knows no such boundaries.

Wood drew his inspiration for this book from a real life source, Dr. L. D. “Doc” Whitaker, a retired veterinarian, poet, and puzzle maker who lived in Farmville until his death in 1961.

“One of my earliest memories was of Dr. Whitaker,” he related. “My father would go over to Doc Whitaker's and sit down with a puzzle. Ever now and then he would solve one of those puzzles, too!”

Another real-life model for Wood are the craft people he encounters at craft shows and bazaars he attends every year to promote his books.

“Craft people are like wonderful gypsies to me,” he said. “A lot of these people travel year-round doing craft shows.”

In spite of the popularity of digital toys, Wood believes there is still a place for the old-fashioned ones.

“Today kids are intrigued by digital toys, still a child is fascinated if you give them something shiny that makes noise,” he said with a smile.

Santa would no doubt agree. The magic of Christmas is obviously at work in The Toymaker's Son.

“The little boy in the book is another whole story,” Wood affirmed. “This little boy, despite his challenges, doesn't lose hope.”

As April's son, Peerless, takes the ride of his life down a snowy hill on the Western Clipper at the story's conclusion he remembers George's advice: “Lean with the turns.”

“There's going to be all kinds of turns along your path, so be ready,” George's father had told him. “Remember, lean with the turns.”

It was advice that would ultimately lead George home to stay.

Those who know this author's work know that he believes in happy endings.

“For me, the world is tough enough on people,” Wood concluded. “No matter what's going on in a Francis Wood story, that story's going to end with hope.”

The Toymaker's Son, a limited edition, is available at The Farmer's Daughter, Sheldon's, Ruth's Florist, and Granny's Attic.