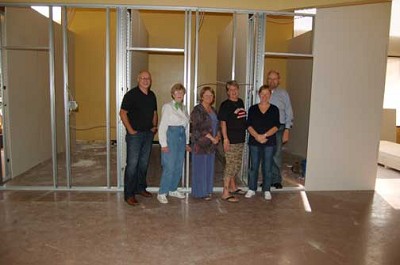 FARMVILLE – Like stepping across a parting stream, supporters of a planned free health clinic press on.

“Things keep falling just out of the sky, it seems,” cited Heart of Virginia Free Clinic Inc. President Sylvia Meadows. “You know, it's like…every hurdle that we seemingly have approached in this year suddenly like-I just could see it's manna from heaven…It's like something breaks loose and where we think there's no possibility, it's right in front of us.”

And, perhaps remarkably, some time early next year, faith will become sight. After months of planning and preparation and one need after another being met, the clinic-that aims to help those without medical insurance who might otherwise fall through the cracks without care-is preparing to open.

The Herald sat down with several members of the Clinic's board at the Farmville United Methodist Church as work continued on the clinic site at the intersection of Third and Main streets in Farmville. And there was more good news.

It is a major hurdle indeed for the organization that is still laying the groundwork to see the first patient. Now they can accept financial gifts directly from individuals and are in a better position to seek grant funds. It's a process that's been in the works about a year.

They had planned to open the doors to the free clinic November 11, but with that target was not reached, the day we met with them, workers were stripping and waxing the floors at the future clinic, the former Daily Grind.

On December 12, the Clinic will hold an open house from noon to 5 p.m. and the general public is invited to come by, tour the facility, pick up an eligibility form or a brochure and talk to a board member. From 7-9 p.m., the Clinic will host a physician's reception. Area physicians are invited to come and talk to a board member and volunteer nurses.

Much groundwork has already been done. A policy and procedures manual was nearly completed at the time of the interview and it was noted that they have sought assistance from the Longwood Small Business Development Center to review their business plan and that Dr. Tony Munoz (acting co-medical director) has addressed the Southside Community Hospital medical staff seeking their cooperation.

Along the way during the months-long journey, the manna has fallen in many forms, from donations they could use to barter things for the clinic, to use of the building that will house the facility, someone to write grants, someone to re-cover furniture, Town Council embracing and supporting the clinic effort, six women volunteers giving the new clinic space a first coat of paint and another volunteer giving it a second coat, a man who owns a painting company calls out of the clear blue and asks if they need help, furniture donations from other entities, a connection to secure hospital equipment-someone who knows someone who's willing to help.

It's a list that could go on and on.

There is, apparently, a great need for the services the clinic will soon offer.

“The population we will be serving is not served by any other agency,” Rev. Meadows said.

“We need to help them. Simple as that,” Dr. Munoz says of who they aim to serve.

Dr. Munoz highlighted that there are 45 million people who don't have insurance.

And when they do have a problem, the slightest thing can throw them into bankruptcy.

Recipients would have to meet certain criteria in order to be eligible; those who have Medicaid or Medicare or insurance would not be eligible for services.

“…None of us that we have right now are fundraisers and we get absolutely no government money whatsoever,” detailed board member Carolyn Whitmore. “And that's the reason that we can even function and…the majority of our monies will come from individual donations…”

When the clinic does open, it is likely to start with one evening a week. Rev. Meadows notes they are hoping to expand services as resources become available. One of the greatest needs is that of participating physicians. The more who sign on, the less the load is for all of those involved.

While they haven't opened the doors just yet, they are already recycling donations to meet specific needs. A donated motorized wheel chair, for example, was loaned out until it was no longer needed and has now gone to help another one in need. They've also sent other items that they've received, too, to help meet someone's need-a bedside commode, a shower bench…

“We've been open in our hearts for a long time,” notes board member Esther Kernodle.

“We're not charging anybody for these things,” Ms. Payne emphasized.

They still need human resources-doctors, someone with business expertise, grant writers, and, of course, money.

They're getting calls, about five a week, from folks interested if they're opening yet.

“It's all about God's call, that's why we're here,” Rev. Meadows said. “We all know that it's something…God wants us to be doing.”

May 1 Town Election In Jeopardy