Commonwealth Chorale To Present 'The Creation' 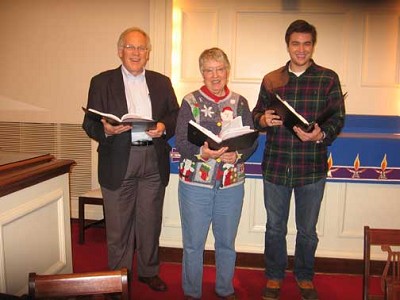 The Commonwealth Chorale will present “The Creation” on Sunday, Dec.11, at 3 p.m. at Farmville United Methodist Church.

“Why not the “Messiah” every year? This undying music is the most popular recognizable music at this time of year,” stated Commonwealth Chorale Director Norma Williams. “One of the Commonwealth Chorales responsibilities is to perform lesser-known monumental choral compositions. Joseph Haydn stands beside Handel as one of the immortal greats. As the Esterhazy court composer Haydn fathered and forged new ideas in orchestral and chamber music. He considered 'The Creation' to be one of his greatest legacies.”

“The work itself is just beautiful,” Williams continued. “It is the gamut of mood and spirit.”

The stunning choruses reflect the world before anything was formed. Dramatic arias of passion roll with foaming seas out of chaos. The tenor solos mirror the songs of birds and nature's worth, while the soprano gently announces the creation of plants and woods. Love and commitment are dedicated in the exquisite duets of Adam and Eve.

“The music is quite difficult to perform,” Williams explained. “There are many fast notes while big breaths are needed in slow high passages. Reggie Davis, a basso profundo – rarest of voices, – grandly announces 'In the beginning God created . . . ' Alex Haskins, an audience favorite, provides the beautiful tenor line while Meg Sandridge-Magnum shares her heavenly voice in soaring splendor. Bob Horn, one of the best baritones around, reflects in Adam's duets a beauty and peace that is unique. Pam McDermott, wearing many hats, brings the new dimension of her love for Adam.”

Marilyn Swanson, Dale Brown and John Eastby represent the common man in portraying “The Heavens are telling” – a rousing drama of God's work. Lowell Frye keeps the story flowing in his recitative explanations.

“He is the foundation in our performances,” the director stated.

“The Commonwealth Chorale is endowed with incomparable musical talents all fused in this great music,” Williams concluded. “In introducing 'The Creation' we feel it is the perfect fit in 2011. It was perfect 'in the beginning.' It can be again if we take time to listen.”

The community is cordially invited to attend.