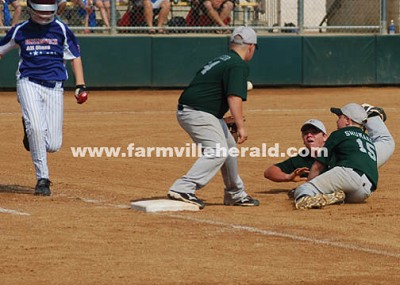 The Year of our Lord 2011 provided many memorable sports moments for the various teams that call the Herald-area home. Some were team achievements, others individual. Some were expected, while others turned out to be complete surprises. Our cameras caught many of these, including the ten on Page 4A in the print edition. Of course, there were many more, but these stood out when we went through the last 12 months.

Below is a brief description of the events and the date (or selected date, in the case of some) a story appeared in The Farmville Herald.

January 21: The Cumberland High School wrestling team successfully defended its James River District championship with a victory over Amelia and Randolph-Henry in the JRD Meet. For the Dukes, this was a bright spot in what has been a tough year for Cumberland sports teams. The Statesmen and Raiders were very strong in certain weight categories, but Cumberland's was that the Dukes were able to fill out most of the weight categories from bottom to top. For a school that usually finds itself on the short end of a numbers game, it was refreshing to see the Dukes enjoy an advantage for a change.

January 26: Cumberland junior guard Devonte Booker erupted for 50 points in the Battle of Route 60. Despite the Dukes dictating tempo, Buckingham was able to out-pace their rivals to the East to capture a 94-82 victory.

May 18: With a 3-3 tie at its longtime nemesis, Powhatan, the Prince Edward County High School girls soccer team finally broke through to capture the Southside District regular-season title. Though not technically a victory, it was a big win for the program, which had finished second to the Indians every year since returning to the Southside District. The Lady Eagles went on to win the Southside District Tournament with a victory over Powhatan in the championship game.

Also, Fuqua's soccer team saw its season come to an end. It was not a good season for the Falcons to start out, but the finish was what every team hopes for if it can't win a championship. Fuqua fell to Kenston Forest 6-0 in the Virginia Commonwealth Conference championship game. But that the Falcons reached the title game was the story. Fuqua entered the tournament as the sixth seed, and defeated No. 3 Brunswick Academy and No. 2 Isle of Wight Academy, before running out of steam against the Kavaliers. Though it didn't win the title, Fuqua's soccer team went as far as it could realistically go – something very few teams can say.

July 8: Due to a couple of bad seasons years ago, the Prince Edward Farmville Dixie Youth Baseball All-Stars program had been given a reputation that it really didn't deserve. Despite several finals appearances and solid showings in both the AAA (Minors) and Majors ranks over the last couple of seasons – in what some consider to be the toughest district in the state – there has been a kind of stigma attached to PEFYA for having bad baseball teams.

The PE Farmville AAA All-Stars erased much of that with an 18-17 victory over Lunenburg for the organization's first District V Championship since the 1998 season.

The PEFYA All-Stars' aggressive style of stretching doubles into triples, stealing bases in situations one wouldn't expect a team to steal a base and taking big swings at 3-0 counts, worked for them. It was fun to watch, and most importantly, it was effective.

July 22: Prince Edward Farmville further proved its strength in Dixie Youth Baseball with a 12-11 victory over Brookneal in the Virginia AA (coach pitch) tournament. The PEFYA All-Stars became one of three teams from the state to travel to South Carolina for the DYB AA Regional Tournament (there is no World Series at the AA level).

August 3: Playing as the third seed out of District IV, the Buckingham County Major League All-Stars were pretty much an afterthought when the 54th-annual Virginia Dixie Youth Baseball Major League Tournament began.

By the final day of the eight-team, double-elimination format, Buckingham stood with Charlotte County and Goochland as one of three teams to reach the finals.

Each team had one loss, which put all three in the final round. A blind draw put Buckingham against Charlotte in a morning game, while Goochland waited for the winner to decide the state champion later that night.

Though considered to be the weakest team in the tournament, Buckingham gave the two-time defending Major League State Champs all they could handle, before falling 9-8. The BC All-Stars fell behind 7-1, before rallying to tie the game at 8-8 in the top of the sixth, before Charlotte scored the winning run in the bottom half of the inning.

September 21: The picture is one that wouldn't normally see the light of day, but for the Prince Edward County High School football team, it was a play they haven't been able to run much over the last three seasons. The Eagles were able to line up in victory formation and take a knee in a 13-12 victory over Rustburg. The Eagles had only tasted victory twice in the previous two seasons, and both were over Bluestone – a program that wished to have PE's fortunes.

Prince Edward trailed for much of the game, but was able to remain within striking distance. Then, junior quarterback Tavon Adams found a diving James Jones in the back corner of the end zone for the go-ahead touchdown. The Eagles had to turn away two serious Rustburg threats, and also had to take a safety with about a minute left in the game, but clinched a win over a team with a winning record for the first time since 2008.

Prince Edward would go on to finish 3-7, but was competitive in several games.

November 9: Fuqua School senior standout Charles Williams led the Falcons to many victories over his three-years as a Falcon. None could've been sweeter than his Senior Night performance against Hampton Christian.

At stake for both teams was a bid into the Virginia Independent Schools Football Association Division IV Playoffs. The winner would play another week, while the loser would get ready for basketball season.

Williams saved his biggest performance of the season for his final game at Gilmer Stadium. He rushed for 226 yards and three touchdowns on only 19 carries, while also returning a punt 60 yards for a touchdown in the Falcons' 44-22 victory over the Warriors.

Fall 2011: How would it feel to be considered to be one of the top football teams in the state, but not even a runner-up in the district?

Buckingham County found out this year. Despite posting an 8-2 record in the regular season, the Knights finished behind Goochland and Amelia in the James River District, which was considered to be the toughest district in the state, regardless of classification.

Behind senior quarterback Tarian Ayers, the Knights rolled to their third-consecutive postseason berth. In 12 games (including two playoff games) the BCHS offense averaged 43.75 points per game, while giving up 19.75 ppg. Buckingham advanced to the second round of the Group A, Division 2 Playoffs, before losing to King William.

The Rest: We realize that there are many other sports stories that are on equal footing with these ten. Hampden-Sydney's run through the ODAC en route to its third conference title in five seasons bears mentioning.

Buckingham senior Libby Morris, who signed a National Letter of Intent to play college softball at Longwood, continued to post strong numbers as the Lady Knights returned to the Region B Tournament.

Those are to name a few, but there are a number of others that could be mentioned as well. In all, it was an eventful year for sports teams around the area. There were some disappointments, but on the whole, 2011 will go down as a successful one on the field and courts.